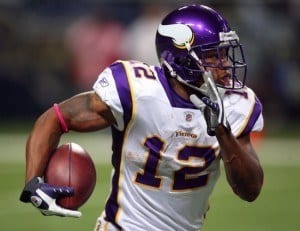 Percy Harvin has produced ample fodder for the sports enthusiast gossip mills, as rumors about his shaky future with the Minnesota Vikings start to swirl.  The ESPN community being as hardcore of a gossip mongering community as any neighborhood stitch ‘n’ bitch, even this relatively inconsequential piece of speculation is making waves in the couch potato community.  So, basically, Percy Harvin is finishing up his four year rookie contract with the Vikings, and Vikings v. future of Percy Harvin has commenced.  Will he stay or will he go now?

Percy Harvin is like an artsy type in the pro-football world.  The talented but troubled player has trouble meshing well with the people he needs to meshing well with, like his coach and teammates for example, off the field.  Vikings Coach Leslie Frazier has already declined to commit to signing Percy Harvin to the team for 2013, a decision that puts the volatile player on the so-called trading block, that is to say he is up for the acquiring by other teams.  Due to his somewhat volatile behavior however, not to mention his exceptionally high price tag, the player might be hard to get rid of.  In these types of situations, as in most situations where there is no clear cut answer, some vengeful and passive aggressive moves take place. AKA Percy Harvin may skip out on training camp or play cat-and-mouse with the Vikings until he gets some answers.

And now, the favorite game of every NFL sports fan, that of team speculation.  Who will get Percy Harvin? There is an article for basically every team that may possibly have a hand in taking this prize piece of football player from my own city’s Buffalo Bills to the 49ers.  In more concrete news, critics agree that a Vikings trade of Percy Harvin would be beneficial for both the team in terms of unity and budget, and Harvin in terms of career development.