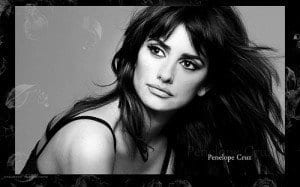 A leak from MI6 tells us that Penélope Cruz  is set to be the next “Bond Girl.”

Perez Hilton reported last night that Penélope Cruz  will be the latest female vying for James Bond’s attention in the currently untitled 24th 007 film. The leading lady in Volver and voice of a guinea pig in G-Force, Penélope Cruz  joins a long line of Bond Girls such as Ursula Andress (Dr. No) and Halle Berry (Die Another Day.)

A lot of buzz surrounding Penélope Cruz ’s turn as a Bond Girl is her age, and rightfully so. When production on the new Bond film begins in 2014, Penélope Cruz  will be the oldest Bond Girl to date at 40-years-old. This of course will change the entire landscape of the film, thus ruining the series completely.

How exactly can you have a Bond Girl be portrayed by an actress past her prime? What will her Bond Girl name be? “Ovra da Hill?” I hope that MGM has plenty of walkers on hand. The concept just seems completely ludicrous. The oldest Bond Girl before Cruz was Honor Blackman, who was 37 at the time of Goldfinger, which is easily the most reviled James Bond movie of all time.

Now you may protest that the argument is moot because current James Bond actor Daniel Craig is 45, but that is obviously a completely different conversation. I mean first off he’s a dude. Secondly he’s got killer abs. And just like Craig, 58-year-old Roger Moore was a totally passable babe magnet in A View to a Kill. So what does Penélope Cruz have? An Academy Award? So does Norbit. #32 on Men’s Health’s “100 Hottest Women of All-Time?” Call me when she breaks the top 30.

Bottom line: shouldn’t Penélope Cruz just throw in the towel on this Bond Girl thing and retire already? She has a two-year-old kid with Javier Bardem, the villain from last year’s Skyfall; clearly no coincidence there.

I just don’t know if a 40-year-old can take on the grueling acting job of being a Bond Girl. They should call up a younger and more talented actress. Like Selena Gomez.