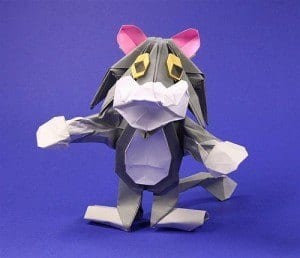 The latest news related to dancing and thinking about it concerns Paula Abdul.

Paula Abdul will be appearing as a guest host on tonight’s episode of So You Think You Can Dance. This news will most likely please fans of “classic” American Idol, in which Paula Abdul also served as a judge.

The real question is what does MC Skat Kat think about all of this? Fans of 80s pop/hip-hop will of course recognize MC Skat Kat as Paula Abdul’s former cartoon cat dance partner and alleged lover from her 1989 music video “Opposites Attract.”

As stated by the Virgin Records album press kit, Skat Kat was a “street philosopher with an alley Kat point of view.” They went on to say that “He enjoys rapping and dancing, has “got an eye for the ladies and remains on the smooth tip with an old school rap influence which adds the street to his new school hip hop.”

Following the failure of his solo album, the former Paula Abdul beau recorded a recycling PSA for the Take It Back foundation with many popular artists of the time – Stevie Wonder, Kenny Loggins and Queen Latifah among them.

Since that time it has been rumored that MC Skat Kat has almost exclusively remained a shut-in, refusing to speak to the press and former collaborators. It’s possible that Paula Abdul is among these individuals cut off from the cartoon cat’s life.

In theory, MC Skat Kat could still be coaching Paula Abdul, silently advising her on her various career moves throughout the past several decades.

It’s anyone’s guess if these two hip-hop legends are still in communication. On the one hand they don’t have a lot in common; on the other hand, that’s what made them fit together so well.

As the song goes:

So You Think You Can Dance airs tonight at 8PM EST