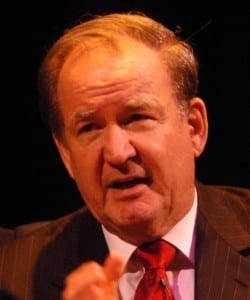 Pat Buchanan, a conservative commentator at MSNBC since 2002, is being let go following a four month suspension due to the publication of his last book, Suicide of a Superpower: Will America Survive to 2025?

Pat Buchanan, according to the NY Times, had been hired at MSNBC when the news channel, “called itself ‘fiercely independent’ and had no clear political tilt.”  Within the past decade, however, the news channel has certainly tilted towards the left, leaving Pat Buchanan as somewhat of an outsider.  Problems hadn’t aroused until the publication of Buchanan’s book; he even forged, “an unlikely chemistry with talk show host Rachel Maddow despite disagreeing on most issues,” according to CBS.  For the two decades before his contract started with MSNBC, Pat Buchanan had hosted CNN’s show “Cross Fire.”

Pat Buchanan’s book, with chapter titles like, “The Death of Christian American” and “The End of White America”, has been considered insensitive, homophobic, racist and anti-Semetic by critics.  NY Times quoted Buchanan’s rebuttal to the accusations, “Consider what it is these people are saying.  They are saying that a respected publisher, St. Martin’s, colluded with me to produce a racist, homophobic, anti-Semitic book, and CNN, Fox News, C-SPAN, Fox Business News, and the 150 radio shows on which I appeared failed to detect its evil and helped to promote a moral atrocity.”  In short, Liberals see the book, and Pat Buchanan, as insensitive where Republicans see the book as eye-opening.

According to reports, the President of MSNBC, Phil Griffin, was quoted last month as saying that he didn’t agree that Buchanan’s book “should be part of the national dialogue, much less part of the dialogue on MSNBC.” A spokesman for the network was quoted, “After 10 years, we’ve parted ways with Pat Buchanan.  We wish him well.”

On Thursday, Pat Buchanan wrote a column which included some choice words about his departure, “In the 10 years I have been at MSNBC, the network has taken heat for what I have written, and faithfully honored our contract.  Yet my four months’ absence from MSNBC and now my departure represent an undeniable victory for the blacklisters.”  He added, “I know these blacklisters.  They operate behind closed doors, with phone calls, mailed threats and off-the-record meetings.  They work in the dark because, as Al Smith said, nothing un-American can live in the sunlight.”

During his four month suspension, Pat Buchanan made many media appearances, mostly with Fox News or its affiliates, and the NY Times reported that, “Several Fox News hosts and commentators publicly defended Mr. Buchanan in January, sparking some speculation that Fox could sign him as a commentator at some point.”