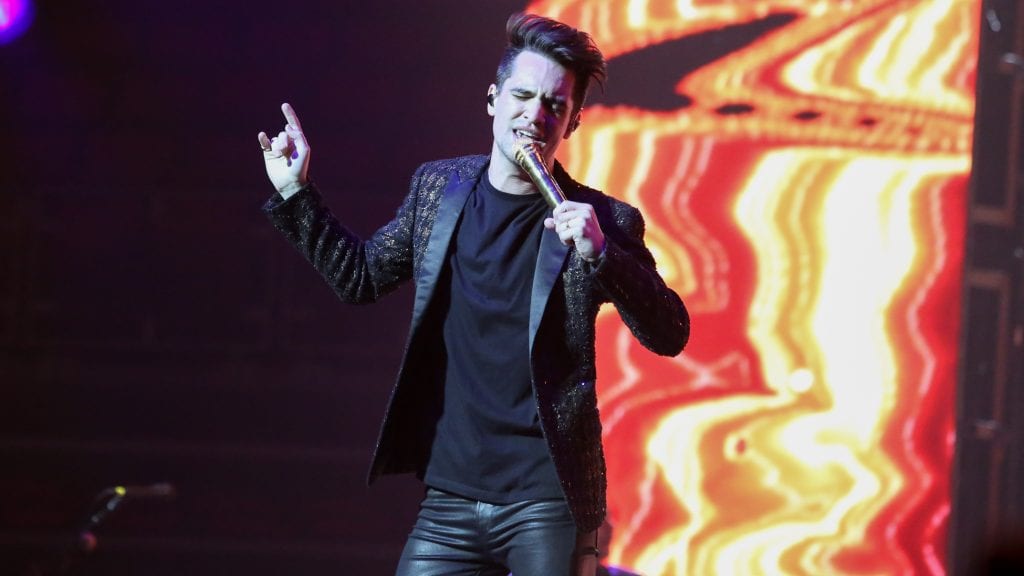 Roughly two years after releasing Death of a Bachelor (2016), Panic! At the Disco has triumphantly returned with their new LP Pray for the Wicked—the band’s sixth studio album and second studio album with vocalist Brendon Urie being the only original member. When describing the experience of Pray for the Wicked, one could easily imagine F. Scott Fitzgerald penning the tales of Jay Gatsby, spinning on a diamond-coated record player at one of the lucrative billionaire’s lavish parties; in fact, listening to the album front to back often alludes to the novel’s themes of high society and too much of a good time.

From beginning to end, the narrative of Pray for the Wicked soars through the highs and lows of experiencing the fame and glamour of living life in a fast-paced, extravagant environment. Pray for the Wicked has elements that can easily be correlated to The Great Gatsby (i.e. “Some [friends] are loyal soldiers / While these other thorns are rosy / And if you never know who you can trust / Then trust me, you’ll be lonely” in Hey Look Ma, I Made It, “Sketchy girls and lipstick boys / Troubled love and high speed noise” in The Overpass, “And if you’re night crawling with him / I won’t take it lying down” in Dancing’s Not a Crime, or the song title and musical elements in Roaring 20s). Basically, after examining the album’s lyrics, musical elements, and listening to the splashes of bright and vibrant tones, Pray for the Wicked alludes to music that would have both been played in the 1920s and relates to the plot of the 1920s-based novel, The Great Gatsby, in its similarities to the rise and downfall of quick and instant success and fortune, within a mess of love affairs and internal conflicts.

One could easily consider Panic!’s latest album to be the next chapter in the classic novel. Examining the two together can easily draw similarities within the basis of the plot, just merely told in two different contexts and two different creative formats. In fact, Urie has also referenced another timeless piece, The Tell-Tale Heart by Edgar Allan Poe. “My Tell-Tale Heart’s a hammer in my chest” from Roaring 20s is both an ode to Poe’s short story as well as a wordplay used to express Urie’s anxiety. Additionally, songs like (Fuck A) Silver Lining, High Hopes, and King of the Clouds, use hints of Greek Mythology and the church that allude to Urie leaving behind his Mormon past and other sacrilegious aspects in his life. These themes are common throughout the entire album and showcase the sheer talent and brilliance that Urie and his creative team possesses; not to mention, how much thought has gone into making Pray for the Wicked.

Long time collaborator Jake SInclair returns to helm the production duties on Pray for the Wicked, whose worked on previous Panic! albums (Death of a Bachelor and Too Weird to Live, Too Rare to Die), along with albums by Sia, Fall Out Boy, Weezer, and P!nk, to name a few. Sinclair helps to shine a light on the creative process behind the record, allowing Urie’s creative choices to feel more fleshed out than ever before. Among Sinclair, other producers such as Jonas Jerberg (High Hopes, The Pussycat Dolls, Jordin Sparks), Jonny Coffer (High Hopes, Beyoncé, Leona Lewis), and Scott Chesak (The Overpass, (Fuck A) Silver Lining, The All-American Rejects) are noted in the album, adding to Pray for the Wicked’s brilliant charm and cohesivity.

All songs were written by Brendon Urie, with other contributing writers such as Michael Angelakos (Hey Look Ma, I Made It, Passion Pit), Lauren Pritchard (Say Amen (Saturday Night), LOLO), Jenny Owen Youngs (High Hopes, Roaring 20s), Alex Kresovich (King of the Clouds, Alexander DeLeon), Mike Viola (Dying in LA, New Politics), and Sam Holland (S*A*M, One Direction) to name a few. All of these unique writers, artists, and producers collaborating with Urie on lyrics helped to bring out the purposeful tones and unspoken hints that are detailed throughout the album. Samples and elements from artists such as The Dells ((Fuck A) Silver Lining), The Budos Band (Say Amen (Saturday Night)), Nathan Abshire (Say Amen (Saturday Night)), Maynard Ferguson (Roaring 20s), Chris Bernard (Dancing’s Not a Crime), James Brown, and Lyn Collins (latter artists featured in The Overpass) are masterfully included within the overall sound of Panic!’s latest record.

There’s a central theme throughout the whole album of living a party-lifestyle with the ups and downs that come along with it – figuring out how to navigate young adulthood, dealing with bouts of crippling self-doubt, and making the most out of life despite the rough times and heartbreak are also common themes throughout Pray for the Wicked. Elements of Urie’s Broadway experience with playing Charlie Price in Kinky Boots were also obvious in the album within the track Roaring 20s, which is simultaneously a name play on Urie’s age (now 31)—he quite literally ended his “roaring 20s” on Broadway. Urie also makes note of some of his favorite musicians and gives them praise for what they’re known for. For example, the bridge in (Fuck A) Silver Lining pays respect to Beyoncé’s career, which in comparison to Urie’s, also started off in a group setting before taking off as a solo artist. “When you gonna say my name? / Quick charade / Beyoncé / Lemonade,” suggesting that Beyoncé’s career during Destiny’s Child was simply a stepping stone that lead her to the 2016 success of Lemonade (he’s right). The beginning of Dancing’s Not a Crime also pays homage to Michael Jackson and his notable moonwalk routine (“I’m a moonwalker / I’m like MJ up in the clouds”).

Musically, Pray for the Wicked is masterful, to say the least, as Brendon Urie’s distinct vocals have never sounded better. His falsettos used in songs like Old Fashioned and Dancing’s Not a Crime are impressive, but one of the most notable vocal arrangements in the album is in the chorus of King of the Clouds – Urie uses his falsetto in the lyrics “I’m king of the clouds / I get lifted” to make a “jumping up” affect in the word “lifted,” which only adds to the songs overall theme and message. It’s merely a pebble within an ocean, but the lasting effect that lone part has on the listener is equivalent to a tsunami. The variety of instrumental plays used throughout the album are impressive as well. Everything from piano, to horns, trumpets, violins, bass, and drums were all used in the production of Panic!’s latest record. Tracks four to eight stand out with the most unique instrumentation styles, which are beautifully placed in the center of the album’s tracklist. Winding down with a ballad appropriately titled Dying in LA simply brings the entire record together, especially ending the album with actual bird chirps recorded from Urie’s at-home studio.

From the largest to the slightest details, there is not one beat, note, or lyric that is missed or overlooked in Pray for the Wicked. There’s a little something for every era of Panic! At the Disco fans within this album. Overall, it showcases a significant growth of Urie musically, as well as a well-rounded appreciation for his past due to all of the lessons he has learned. As sampled in the latest album, “Ode to the old, and to the new / We rededicate this song to  you.”