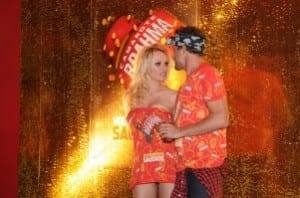 Pamela Anderson’s bouncy…um…personality will hopefully be crossing the finish line at this year’s ING New York marathon. The “Baywatch” bombshell announced via her Twitter account on Sunday, that she would be running in the vigorous 26.2-mile race to raise funds for actor Sean Penn’s charity.

According to femalefirst.co.uk, Anderson hopes to raise a monumental sum of $500,000 for the charity that is dedicated to the restoration of Haiti after the devastating earthquake that claimed nearly 160,000 lives.  Penn’s amazing foundation provides victims of the 2010 earthquake with brand new homes, education and other essentials.

Pamela Anderson communicated her love for the country on her fundraising page and describes her experience after the disaster. “I was in Haiti shortly after the earthquake to help with local farms and food distribution in tent camps. I visited J/P HRO when it was in the beginning stages. I brought cold beer through rubble-covered streets to volunteers who were working long days surrounded by dust and death. I have known Sean [Penn] a long time…I love him dearly.  I think many people shine in Haiti. They jumped. Took action. Made the decision to help…What if we ALL had the nerve? I think deep down we all do…it feels good to help and it heals us too.

Anderson, who was a contestant on shows “Dancing With the Stars” and the U.K’s “Dancing on Ice” told the Daily News about her latest ambitions. “I like to do things that people think maybe I can’t do, and this is definitely one of those things.” She added,” You know somehow I learned to dance, learned to skate, and all these things people thought I couldn’t do. Now, I’m running a marathon.”

The massive race will require a lot of training and for someone in his or her mid-forties it could prove to be a major challenge, but Pamela Anderson is confident that the spirit of Haiti will push her to the finish line.

“People do things for other people that they wouldn’t ordinarily do for themselves. Haiti is such a magical place. It ha a real special place in my heart…I have a lot of faith that I will be able to get through it. I’m committed.”

Anderson will be joined by supermodel Christy Turlington and reality star Bill Rancic in the race.