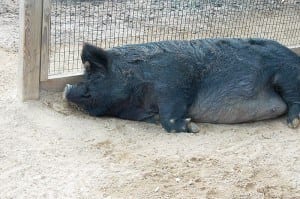 A 69-year-old farmer never returned from feeding his hogs

Terry Vance Garner, 69, set out Wednesday to feed his hogs on his farm near the Oregon coast, but never returned. Family members called authorities upon his disappearance and parts of Garner were later found in the hog enclosure. According to Paul Frasier, Coos County district attorney, “They first found his dentures and his hat, a package of cigarettes, and his pocket knife. Then they started seeing pieces of his body.”

These hogs weigh in at about 700 pounds or more. Although the situation is still under investigation, it is possible that Garner suffered from a medical condition at the time, possibly a heart attack, and was knocked over by the hogs, causing him to be killed and eaten. Garner’s remains are to be examined by a forensic anthropologist at the University of Oregon.

Terry Garner had raised hogs for years and sold the young ones to the 4-h clubs at schools.

Garner’s brother Michael reported that his brother was spooked by one incident with a hog in the past. Michael said “He stepped on one of the babies one time and the mother bit him.”

According to John Killefer, head of the Animal and Rangeland Sciences Department at Oregon State University, “Domestic hogs are not typically known to be as aggressive as their feral cousins, but there is some degree of danger associated with any animal.”

This unusual case remains under investigation. Foul play has not been ruled out.