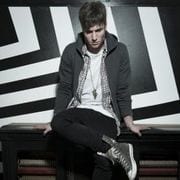 We interview one-half of the duo Graffiti6

Graffiti6 is fronted by Jamie Scott – a former folk musician whose latest album ‘Colours’ has launched him into the soul, pop spotlight.  ‘Colours’ was a result of years of performing and songwriting experience as well as the collaboration between Scott and the celebrated songwriter-producer, as well as fellow London native: TommyD. Graffiti6’s critically acclaimed debut album was released in the UK in 2010 and the US version is set to be released today and may be purchased here.

Allyce Andrew: Hello, Jamie! Thanks for taking the time to answer these questions!

Your debut album, ‘Colours,’ is set to be released very soon in the US but it has been out in England for quite some time. Does that fact make the debut any less exciting or are you still stoked to reach an entirely new audience?

Jamie Scott: No, we are still very excited for the US release because we have spent a while now here in the States so it will be really cool to actually have the main body of work out so people can hear it. And of course it’s a great country to tour so we are ready!

AA: You’ve been touring a lot in the US, which is something that I read that you’ve been waiting to do for years and now you’re set to perform at Jay Leno. Has it been as grand as you expected?

JS: Yeah I think that until you get on plane and fly from state to state, you can never quite imagine the size of America! So for me it’s also amazing to see the different cultures and people all over the States as well as getting to perform our music so much.

AA: You are certainly not new to writing and recording music, is Graffiti6 the project that you see yourself sticking with for a long time?

JS: Yes for sure!

AA: Tommy D was an essential component in the writing and production of ‘Colours,’ how did you two hook up?

JS: We met through my old Label boss who knew Tommy and thought we should meet…it was as simple as that.

AA: Your past work, namely Jamie Scott & The Town, was especially stripped down and influenced by folk and soul music while Tommy D has a lengthy resume of work with pop and hip hop artists. Were you initially hesitant to work with someone who approached music in a different way than you did?

JS: I was actually excited about it and very open to change for a while because i had been going through a rough few years and wanted to feel i was starting a fresh with a few things in my life. So this actually came at a great time for me.

AA: You achieved a good bit of well deserved success with your former project,
what made you shift gears and form Graffiti6?

JS: Well the decision to call what we were doing ‘a project’ only really came after we had written 4/5 songs together and soon realised we had a sound and a style going on so I would say I fell into Graffiti6.

AA: What was your initial attraction to music since you approached it at such an early age? Also, you have a very soulful and striking voice, what were some of your influences as you were growing up and today?

JS: Well, I first remember hearing a record when I was 7, and it was Joni Mitchell. The album was ‘Blue’. I think i had a connection with music since then. I started to teach myself the guitar and piano and before long I was realising that writing music was an amazing way to get things off your chest and relieve your soul a little. As for the soul influences, i heard mostly only Stevie Wonder, Marvin Gaye, Curtis Mayfield, Donny Hathaway and so on when I was younger. Combined with a lot of folk records.

AA: A lot of musicians seem to attribute their home town to their musical style – growing up in England, do you think that your work would sound any different if you would have been born in another area?

JS: No, I think because of the music I listened to, wherever I was from I would have still been influenced heavily my folk and soul music.

AA: What are the future plans for Graffiti6? Will Tommy D still have a major role in the next record?

JS: Yes most definitely….Graffiti6 in the studio, is a collaboration between myself and Tommy. Without either of us it wouldn’t be Graffiti6 anymore. In terms of the future…..Endless touring I hope!

AA: Again – thanks for taking the time to answer these, happy touring and best of luck in the new year!

JS: Thank you so much.

Get a taste of Graffiti6 by checking out the music video for “Free” below!