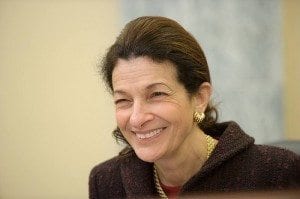 Olympia Snowe, Maine Republican Senetor, has decided to not seek a fourth term two weeks before the deadline to qualify. The newly opened seat has caused candidates on both sides to scramble to get on the primary ballot for July.

According to reports, Snowe was said to be a shoe-in for another six year term, so her announcement came as a bit of a surprise.  She hasn’t been secretive about her irritation “over what she viewed as excessive partisanship and gridlock in Washington,” the Huffington Post said, Olympia Snowe “questioned whether she could’ve been effective over a fourth six-year term as a moderate in chamber where increasingly strident conservative and liberal ideologies have left less room for a centrist like Snowe to maneuver in the middle.” Snowe was quoted as not believing the partisanship will change anytime soon.

“Unfortunately, I do not realistically expect the partisanship of recent years in the Senate to change over the short term,” said Olympia Snowe. “So at this stage of my tenure in public service, I have concluded that I am not prepared to commit myself to an additional six years in the Senate, which is what a fourth term would entail.