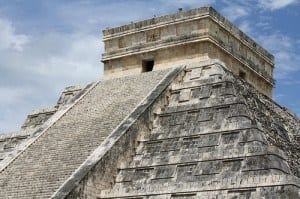 The Mayan Calendar that supposedly has predicted the end of the world (December 21 of this year, by the way) has been cancelled out thanks to a new discovery.

The oldest Mayan calendar has just been discovered deep in a Guatemalan rainforest by Boston University’s archeologist William Saturno. This Mayan calendar goes well beyond this year’s doomsday prediction.

In 2010, Saturno was mapping the ancient Maya city of Xultun in northeast Guatemala when one of his undergraduate students made the discovery. The student decided to take a peek into an old trench that has been dug out by looters. The student reported to Saturno that he had seen traces of ancient paint, a comment which Saturno didn’t think would bring about anything worthwhile. CS Moniter reported that Saturno “felt he had a responsibility to excavate the room the looters had tried to reach, if only to be able to report the size of the structure along with the paint finding.”

That’s when he saw a mural of a kind and the oldest Mayan calendar, to date. “The calendar seemed to have been added after the murals were completed, as some of the numbers cover up painted figures on the wall. It’s almost as if an ancient scribe got sick of flipping through a document to find his timkeeping chart and decided to put it on the wall for at-a-glance reference,” reported CS Moniter.

The complicated hieroglyphics of the Mayan calendar is a big find because the only other calendar and astronomical tables came from the Dresden Codex, which dates back around the 11th or 12th century. This new Mayan calendar, painted in black and red, is dated around A.D. 800.

In case you forgot, CS Moniter gives an understable explanation of why 12-21-2012 has been the doomsday prediction for so long: “The Maya recorded time in a series of cycles, including 400-year chunks called baktuns. It’s these baktuns that have led to rumors of an end-of-the-world catastrophe on Dec. 21, 2012—on that date, a cycle of 13 baktun will be complete. But the idea that his means the end of the world is a misconception. In fact, Maya experts have known for a long time that the calendar doesn’t end after the 13th baktun. It simply begins a new cycle.”

Take a breath of relief because archaeologist David Stuart of the University of Texas who helped decipher the new discovery, “The Mayan calendar is going to keep going for billions, trillions, octillion of years into the future; numbers we can’t even wrap our heads around.”