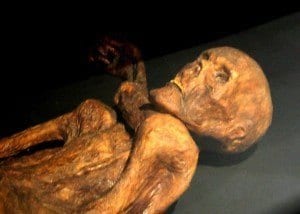 The oldest human blood was found in the remains of Otzi, the 5300 year-old iceman.

Scientists examining the remains of Otzi, the prehistoric iceman who roamed the Alps thousands of years ago, found traces of the oldest human blood ever to be recovered.

Scientists have already sequenced Otzi’s DNA and determined his last meal via intestinal samples. Now, traces of the oldest human blood have been discovered at two wound sites on Otiz’s body.

Otzi was killed by an arrow, but red blood cells found at the site of the wound show that he likely lived several days after he was shot. In addition to the arrow wound, a laceration on Otiz’s hand rendered red blood cells.

Otzi was discovered by mountain climbers in 1991 sticking out of a glacier in the Tyrolean Alps on the Austrian-Italian border. His body was somewhat preserved by the ice, lending scientists the rarest of looks into the history of human biology and now the oldest human blood.

He had brown hair and type-O blood and was believed to be 45-years-old when killed.

To analyze the oldest human blood, nanotechnological equipment scans the surface of the tissue samples with a very fine probe. As the probe moves over the surface, sensors measure every tiny deflection of the probe, line by line and point by point, building up a 3D image.

Basically, miniscule needles showed scientists that the oldest human blood looked a lot like the blood in the newest born baby. The images rendered by the analysis showed typical donut-shaped red blood cells, just like they look today.

The scientists also used a laser to identify the molecules, making sure that what they were looking at was blood and not pollen or bacteria.

“Up to now, there had been uncertainty about how long blood could survive, let alone what human blood cells from the Chalcolithic period—the Copper Stone Age—might look like,” Albert Zink, head of the Institute for Mummies and the Iceman at the European Academy of Bozen-Bolzano said in a news release.

“Because fibrin is present in fresh wounds and then degrades, the theory that Otzi died straight after he had been injured by the arrow, as had once been suggested, and not some days after can no longer be upheld,” Zink added.

In addition to giving us an insight about Otzi’s life, the discovery of the oldest human blood cells may help in crime scene investigations.

“This will also open up possibilities for forensic science and may help lead to a more precise determination of the age of blood spots in crime investigations,” Zink added.

Zink said he and his colleagues hope to carry out further analysis on Otzi’s enzymes, proteins and immune system.