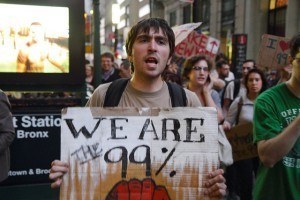 The movement has entered into its 30th day in New York

The Occupy Wall Street in New York has officially reached its one month birthday. With the movement continuing to grow, nearly $300,000 has been donated to the website. What started off in a small Manhattan park has progressed into movements all across the country, as we reported earlier. As of now, the movement has ventured across the seas, and protests for Occupy can be seen in Europe.

The movement has focused on not having set demands and allowing protesters to come up with their own personalized demands, as evident from different signs seen from different protestors.

However, some protestors question not having a list of set demands, and it has caused a debate among protestors and supporters.

John St. Lawrence, a participant in the Occupy Orlando, said, “I don’t think the underlying theme is a mystery. We saw what the banks and financial institutions did to the economy. We bailed them out. And then they went about evicting people from their homes.”

Some protestors have established demands that cater to their own city’s needs like in Pittsburgh.

The movement in New York has proved to be an example of other Occupy movements. They have managed to go global, unite people of all backgrounds for a common cause and gotten national attention.

To find out where Occupy is in your city: click here