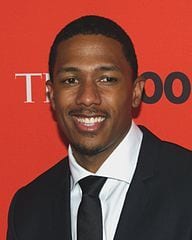 The Inquisitr cites a recent interview with “Us Weekly” during which Nick Cannon Gushed over his wife’s recent workout routine.  He says that Mariah’s decision to commit to a daily workout after having her kids is “the best thing ever.”

Mariah, who gave birth to Moroccan and Monroe six months ago, is already back down to her pre-baby weight.  Cannon shared that Mariah had been “aiming to look as she did in the 1990s.”

And Nick won’t be complaining.  At a recent award show he said his wife is “killing it” with her vigorous workout routines.  He continued to prove that he’s truly gaga for his wife’s va-va-voom. “You saw how good she looked on Friday’s 20/20 Special,” he said.

But Mariah’s awesome and seemingly ageless figure isn’t the only reason he’s a happy man.  In the 20/20 interview, he shared, “My family gives me everything. Unconditional love means the world to me. I mean it is a completion. It’s a beautiful place to be.”