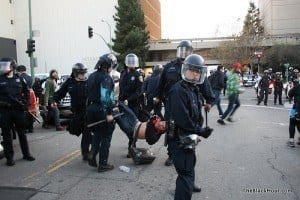 The Occupy Oakland encampment in front of Oakland’s city hall was broken up after police deployed beanbag rounds and tear gas.

MSNBC reports that police deployed five volleys of tear gas Tuesday night. The tear gas was so intense that some protesters vomitted and doused their eyes with water in an attempt to relieve the pain.

Officers also fired beanbag rounds into the crowd, causing the encampment to disperse in less than an hour.

The Occupy Oakland’s scuffles with the police were posted in real time on Twitter and Facebook as the fights broke out. And a photo of a woman in a wheelchair being sprayed with tear gas quickly made the rounds on the Internet.

The Occupy Oakland movement is a branch of the Occupy Wall Street movement that began in September.

Read more about Occupy Oakland here and here. You can view photos of the incident here.