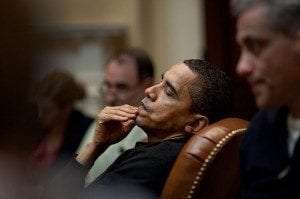 No Child Left Behind may leave some behind

No Child Left Behind will be losing some states today as President Barack Obama plans on freeing 10 states from the law’s strict parameters.

NBC reports, that Colorado, Florida, Georgia, Indiana, Kentucky, Massachusetts, Minnesota, New Jersey, Oklahoma and Tennessee will be the first states to receiver waivers from the education act; however, they are required to reassess how the evaluate and prepare students. New Mexico had applied to have the requirements waived for their state, but their application was denied.

President Obama has referred to the law that his predecessor George W. Bush enacted as admirable but imperfect, feeling that it only hindered students rather than enabling them to their full potential. By 2014, No Child Left Behind calls for all students to be proficient in both reading and math. Many feel that this is an unachievable goal.

For a state to obtain a waiver from the law, they must show a plan that will adequately prep students for college and a future career. They will also have to set new goals for increasing achievement for all students in their state. Obama plans on rewarding the schools that reach their set goal.

Under the law, educational facilities that fail to meet the set requirements for two years or more may have to bus children to better schools, replace teaching staff or setup tutoring programs.

No Child Left Behind was originally passed in 2007 with bipartisan support, aiming at helping the country poor and minority children. Schools that receive a waiver will be tested yearly, but they will not be subjected to the penalties of the states that are still under the law.

New Mexico is currently working with the administration to be applicable for the waiver. The District of Columbia and Puerto Rico have also inferred that they too plan to apply for waivers.