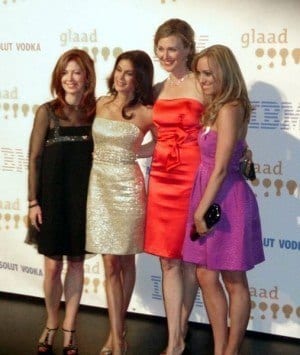 Nicollette Sheridan went to the courts in a wrongful termination case against Desperate Housewives creator Marc Cherry recently, but the jury just can’t make up its mind.

Nicollette Sheridan claims Marc Cherry killed off her character, Edie Britt, after she sued him for hitting her on the head during filming. The battery charge was thrown out, but that hasn’t stopped Nicollette Sheridan from filing a wrongful termination suit.

However, the jury is deadlocked. The judge has declared a mistrial because no verdict could be reached. Nicollette Sheridan did not win the case, but she didn’t lose either. Her attorney says they will just have to try again.

Eight jurors, only one short of the required nine, sided with Nicollette Sheridan. The other four jurors sided with Touchstone Television Productions, whose lawyers said Marc Cherry never hit Sheridan and that the plot line had included Edie’s death for months before the incident.

Much of the testimony focused on the timing of Nicollette Sheridan being released from the show. Ten witnesses said Marc Cherry had made the decision to kill off Edie Britt months before the alleged hitting incident, but two writers for the show said that Edie’s death wasn’t a sure thing until the intital afterwards.

Nicollette Sheridan’s lawyer said that he is confident he can swing the one extra vote needed in a retrial.

Desperate Housewives may be ending this year after an eight-season run, but the showdown between Nicollette Sheridan and the show’s creator may outlast the finale. Stay tuned for round two of this not-so-epic legal battle.