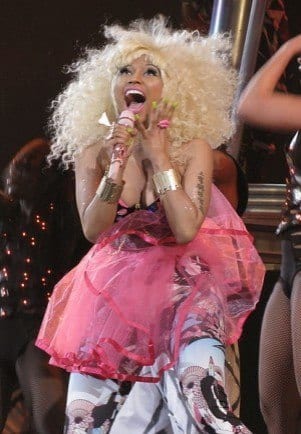 It appears Nicki Minaj is supporting Mitt Romney’s presidential bid. In a guest appearance on Lil Wayne’s track titled Mercy from his mix tape Dedication 4, Minaj appears to back Romney. The track was released online Monday.

The rappers lyrics say “I’m a Republican voting for Mitt Romney. You lazy bitches are f—king up the economy.”

Some find it shocking that Minaj would vote for a presidential candidate who is essentially getting zero percent of the African American vote. But exactly how trustworthy are her lyrics?

Considering she has previously rapped about “eating brains with her gold teeth,” Minaj may not be the most credible person to rely on.

Nicki Minaj has not been reached for comment about her lyrics or whether or not she is actually a registered voter in the United States.

Who knew politics and rap music went hand in hand?

This isn’t the first time Nicki Minaj has expressed her political views via song. Back in 2009, her song Mind on My Money says “Tell Michelle I got my eye on Barack Obama.”