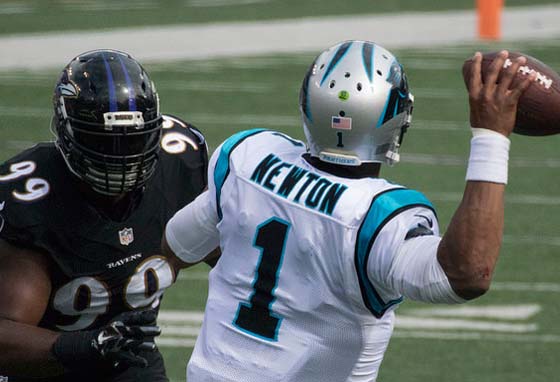 Cam Newton vs. Peyton Manning the Battle between Generations in Super Bowl 50

It has now been decided; Denver Broncos and Carolina Panthers will go to Super Bowl 50. The last several years have demonstrated a generational battle between the elite quarterbacks of the last decade and the young hungry guys looking to cement themselves into the hierarchy of football greats. Winning a Super Bowl is one of the more elusive prizes known to athletes. The opportunities for winning one are slim and take a collective effort from every person in the locker room and a part of the organization to bring the goal to fruition. Many professional football players spend their entire career chasing the opportunity to hold up that Lombardi trophy in a triumphant reign as league royalty and never do. The 2015-2016 season leading to Super Bowl 50 has been one to remember. Offering some great story lines that propelled players and teams into a new stratosphere of fame and popularity.

You will also like: Are the expectations too high for Jim Harbaugh

The playoffs have somewhat predictable. Outside of the upset this past weekend with the Denver Broncos, led by the great Peyton Manning, the teams who were expected to win have taken care of business. That being said, the Super Bowl match-up has been decided and the Carolina Panthers led by bodacious quarterback Cam Newton will take on the veteran Denver Broncos team who looks to redeem themselves after that embarrassing butt whooping they took from the Seattle Seahawks a few years ago. This could be the final chance for Peyton Manning to place his name among the league’s greatest ever with a win in Super Bowl 50.

Survival: How did the teams get to Super Bowl 50

The Denver Broncos came into Sunday as the underdog against the defending champions New England Patriots, despite holding on to the #1 seed in the AFC. They also possess the top rated defense in the NFL and a quarterback with enough history behind him to make up for any of their deficiencies. This being said, it was all but a perfect year for the Broncos and their quarterback. Despite leading the AFC west most of the season they did battle with Kansas City throughout the season for that top spot. The aging Manning went through many ups and downs throughout the season eventually losing his starting job and sitting the bench for the first time since he was a freshman at the University of Tennessee, over 20 years ago. Although, it may have been a needed wake-up call for the 39-year-old veteran who came back his winning ways after sitting out week 11 through week 16. The veteran has been able to manage the game very well and rely on their defense to do the rest. I don’t know if this formula will be enough to beat the rough and rugged Panthers.

He returned week 17 and has yet to look back. Dealing with arm strength and accuracy problems most of the season despite the Broncos winning ways, the twilight of a legendary career seemed to be creeping up on Manning. Taking the 5-week break from the field may have been the jolt he needed to propel his team to their 2nd Super Bowl appearance since he arrived in the Colorado. He now has an opportunity to set himself up for a glorious retirement, being the oldest QB to ever lead his team to Championship game, surpassing John Elway in that effort. He takes on another young and hungry quarterback, Cam Newton who has much to prove in his own right.

Cam Newton’s journey to superstardom has been a rocky one to say the least. Watching players who were drafted in the same class as him, Russell Wilson, Andrew Luck and Andy Dalton have playoff success over the last several years has had to be a hard pill to swallow. Now that he has been surrounded with a team that complements his seemingly unstoppable attributes, the Carolina Panthers are now one Super Bowl 50 away from history. The Panthers have been the best team in football all season. Their 15-1 record has been as dominating and convincing as any this season. Jumping out to big first half leads and letting their defense close out games has been their m/o and it has worked flawlessly.

The defense has been the anchor for the Panthers just as the Broncos D kept them pushing through the hard times. Cam has lacked a legitimate target at wide receiver but has not missed a beat. Turning no name wide outs into impact players, and relying on veterans like Greg Olsen at the tight end spot to make big plays when they need them. Newton had his most accurate season so far as a pro, and ran the ball down the throat of every defense he faced. This is why he is the front-runner for MVP this season.

The Panthers may have had the hardest rode to get to the championship. Despite earning the bye week to start the playoffs they had to defeat two time defending NFC champions the Seattle Seahawks and the up and coming powerhouse out of the NFC West, Arizona Cardinals, to punch their ticket into the big dance. They did just that. Putting a stop to the NFC West’s dominance over the last 3 seasons. Now that the teams are matched up and the dust has cleared, who will have the upper hand in this matchup?

Carolina brings a confident team into Super Bowl 50, taking their only loss in week 16 to their division rival Atlanta Falcons, its seems to me they have a meeting with destiny this season. Cam will win MVP, rightfully so, and they will put pressure on Peyton Manning early and who knows how that will affect the Broncos leader. Carolina is the best 1st half team I have seen in a long time. They rarely have slow starts and when they do, their defense has been able to limit the other team from getting points. That being said they have yet to play against a defense as stout as the Broncos. If the Broncos D can limit the bulldozer effect the Panthers running game can bring to the table, they have a good chance for the upset.

It will definitely be an upset, the Panthers in my eyes, are the better team and they defeated better teams to get to Super Bowl 50, it will take a legendary performance by Peyton and his team in Super Bowl 50 to get this W. Denver has some making up to do from their last Super Bowl appearance so that may also play a significant role in how the game turns out. From the outside looking in, I believe the Panthers will come out victorious with Cam Newton reigning supreme as Super Bowl 50 MVP. The torch will be passed this year to the next generation and Cam Newton will take it in stride. Who do you think will win Super Bowl 50? Leave a comment and let me know.