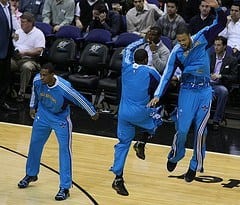 The New Orleans Hornets fans have known for months that a major change was in the works, and now it is confirmed: the NBA team will overhaul its image next season, changing its color scheme, logo and name. Goodbye Hornets, hello Pelicans.

The New Orleans Pelicans, according to Marc Spears of Yahoo Sports, will be the team’s new name starting in 2013. The name change is being officially announced on Thursday, after months of speculation about what changes the Hornets would make to their image. Other ideas being floated around were the Bulldogs, Swamp Dogs, or Mosquitos.

Along with the change in names, the color scheme of the jerseys has been updated; for years the New Orleans Hornets have sported blue, purple and white jerseys. The Pelicans, however, will sport gold, blue and red. The team’s new logo has yet to be revealed, but may be shown during the team’s name change announcement on Thursday.

The New Orleans Hornets is a name familiar to NBA fans, so the Pelicans name might be hard to swallow at first. But upon further inspection, the name is actually a better fit for the team; the pelican is the state bird of Louisiana and appears on the state’s flag.