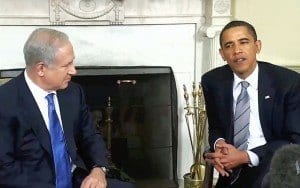 Netanyahu, the Israeli prime minister, has returned home to Israel after concluding a trip to the United States and Canada.

“We return for the Purim festival and tonight we shall read in the Book of Esther about the days when Jews were not masters of their own fate and could not defend themselves,” said Netanyahu upon landing. “Today we are in a different world and a different time, we have a strong country and a strong army,” he added. “The threats are still there but we can defend ourselves. We have many friends who stand by our side and will always stand by us.” The prime minister said his visit to the US and Canada was important. “We have many courageous friends,” he said.

While here in the U.S., Netanyahu gave the president a gift. The gift was a copy of “Megillah of Esther,” the scroll that recounts the story of Queen Esther leading the Jews to victory over their enemies. The message Netanyahu was sending is pretty clear: When the Jews see a conspiracy forming against them, they will take preemptive measures.

“My friends, this is not 1944,” he told Aipac. “Today we have a state of our own. The purpose of the Jewish state is to secure the Jewish future. That is why Israel must always have the ability to defend itself, against any threat.” Netanyahu also added, “We must always remain the masters of our own fate.”

Obama has said that “the United States will always have Israel’s back,” but he has made it clear that he will not join in unless the U.S, is directly threatened, signaling to the prime minister that he is not giving Israel permission to attack Iran, but is instead offering a more general feeling of solidarity.”We do believe there is still a window that allows for a diplomatic resolution to this issue,” he said.