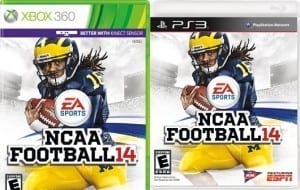 The same, but different…

It’s a difficult thing to introduce a title year after year with expectations of decent sales, but that’s exactly what EA Tiburon is tasked with annually. In the 17th release of the title, EA is introducing the Infinity Engine 2 which makes some drastic changes to the way the game handles on both offense and defense. If you enter the game expecting to use the same tactics and maneuvers from previous years, you’ll find yourself facing staring up at a scoreboard deficit that isn’t easily overcome. It’s in that sense that NCAA Football 14 feels like a new game, but thankfully the new features don’t end there. With new implementations littered throughout each of the gameplay modes, EA has gone to lengths to ensure players don’t feel like this is simply a rehash of previous iterations. The questions is: did it work?

The most important feature is the new Infinity Engine 2, as it’s used to improve on the physics of the game overall. Previous years included a physical system to mobility, meaning bigger players moved slower but were also harder to take down for some of the smaller, quicker players. That improvement returns and seems more accurate this year, as your beefier players seem more difficult to tackle overall. Tight ends and running backs with high strength excel at slowing the game down and grinding out yards where an agile receiver has more difficulty excelling. The passing game overall seems more difficult than in previous years, relying on a receiver’s catching ability to haul in difficult throws. Unwanted contact during the catch is also a large factor, which was always apparent but never quite so blatant as this year.

The running game may have seen the biggest overhaul, taking the typical truck system and improving on it. If you run as in years past though, you’ll find yourself grossly frustrated and with very minimal gains. That’s because in NCAA Football 14, the right stick rules all. Instead of the simple jukes, trucks or spins that you’ve become accustomed to, this time around you can perform combination maneuvers. A left-right double juke works wonderfully in the open field for instance, but may not work in traffic. Instead, a juke-spin may get you the space needed to gain you the extra five or ten yards needed for a first down. Balance is also a contributing factor, as players with a habit of forcing the right-stick forward in order to run over opponents will find themselves leaning too far and falling over. To compensate for that, and for semi-solid hits that don’t entirely bring you down, players will see an indicator telling them which direction to flick the right thumbstick in order to keep their balance. It’s that sort of give-take with the mobility system that makes the game feel more realistic this year.

The game modes have also undergone some changes, but only to particular characteristics of each, as drastically changing them would remove the charm that each has. The most glaring is the change to coaching and recruiting in Dynasty Mode. No longer do you have to tactically determine phone calls and spend copious amounts of time meticulously contacting each recruit. Instead, coaches can simply allot a pool of points from a finite total that they want to dedicate to each player. As you determine what is important to a player, your coach will receive bonus points depending on how well your school handles key characteristics that are important to a player. Have a gaping hole at running back? A running back looking for playing time is more apt to keep an eye on your school. As your points add up, you’ll find that you’re the frontrunner for particular players. Don’t sleep on a coaches individual skills though, because as you play and earn experience for your coach (achieved from in-game accomplishments), you can enter an RPG-like skill tree that grants particular bonuses. Recruiting bonuses for particular times of the year or options to force yourself into the player’s view are just some of the benefits you can get. Additionally, your coaches skills can be angled toward the field as well. Earning the ability to prevent players from being rattled or staying hot in close games is invaluable, but you’re faced with weighing the benefits yourself because as you play, you’ll find it harder and harder to earn the skills needed to get better.

The Ultimate Team and Road to Glory modes return and remain largely unchanged, although for those falling into the rabbit hole that is Ultimate Team, you’re urged to play the demo for NCAA Football 14, as it provides some valuable players when you finally purchase the full game. Online play and Online Dynasty also return with few changes, the exception being the engine itself. Thankfully, the game is a large step in a direction that allows players to feel good about their purchase. The new engine and improvements to particular game modes will justify the purchase, while what you loved about previous versions remains unchanged while still feeling “new”. If you’re a fan of football, whether you have your own team or just enjoy the sport, NCAA Football 14 is worth the investment.