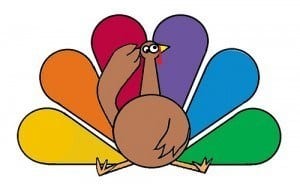 Oh NBC, sometimes you’re like a crazy old uncle who thinks that rotary phones are going to come back in style. NBC has been hurting in the ratings game for almost a decade now and hasn’t addressed the press since January of this year.

NBC execs gave a state of the union-styled speech yesterday during the Television Critics Association press tour in Beverly Hills. During the speech, NBC entertainment executive Bob Greenblatt defended the network’s ratings and cited the uphill battle that network TV has against cable.

Greenblatt seemed to shrug off the success of cable network AMC as a fluke, despite a show like The Walking Dead, which was last fall’s highest rated show on TV, network and cable. The NBC exec referred to cable television as “the bastard child,” saying:

“Our peers in the industry don’t look at the work we do. They just look at the shiny new bulb in the cable world … it’s just a fact of life … I lost count of how many networks do original programming these days … I wish we could get more respect for the good work that we do.”

Revolution was the one of the most anticipated shows when it premiered last fall, with an audience of 11.65 million. By the end of the first season however, there was a big drop-off in ratings, with the season finale hitting only 6.17 million viewers. The series has been renewed for a second season however.

Greenblatt wrapped up the anti-cable rant by stating that network TV is held to a stricter standard, saying that if many of the cable shows (clearly not counting The Walking Dead) did the same ratings on network TV, they’d be cancelled.”

“If we could put on one show a year, it would be the best show you ever saw,” he said.

The NBC spokesman related disappointment in the cancellation of comedies The New Normal and Go On. He described the frustration he has with comedy TV and noted that perhaps The New Normal was “ahead of its time.”

Greenblatt also defended the network’s current stance in the ratings, which has more or less stayed the same; not risen or fallen too dramatically.

“At this point in our business, flat is the new up. Network television declined 4 to 7 percent…in that environment I think holding your position is a good thing…the other nets are all down,” Greenblatt stated.

Another highlight of the press conference was the unveiling of some of NBC’s new shows this year, including drama The Blacklist, a Hilary Clinton miniseries and a TV reboot of Rosemary’s Baby. With NBC’s Hannibal and A&E’s Bates Motel, television is really jonesing for rebooting classic Hollywood horror these days I guess.

In a nutshell, the NBC press conference was just the latest example of all the cracks in the NBC television structure, and their odd way of adapting to the changing climate that shows like The Walking Dead and Game of Thrones have made.

Do you still watch NBC shows or are you an AMC zombie who just watches The Walking Dead?