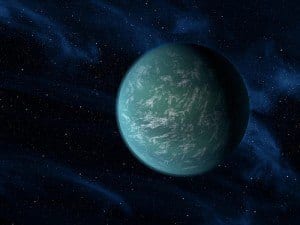 Kepler-22b could support both liquid water and life

A new discovery from NASA could be the best candidate yet for an Earth-like life-bearing world beyond our own solar system, and it’s only 600 light-years from our home planet.

NASA’s new discovery, named Kepler-22b, shares some crucial similarities with Earth, leading scientists to believe that this newly-discovered planet could be the best chance yet for supporting life.

Kepler-22b was spotted by NASA’s Kepler space telescope in its position outside our solar system. Scientists are excited about this recent discovery because of the potential for life present on Kepler-22b, thanks to a few key characteristics.

“It’s right in the middle of the habitable zone,” said Natalie Batahla, a Kepler scientist. “The other exciting thing is that it orbits a star very, very similar to our own sun.”

What excites scientists and researchers beyond Kepler-22b’s position within a Goldilocks zone, are the similarities the planet shares with our own.

It is believed the temperature at the surface of the planet, if it indeed has a surface, is the equivalent of a cool summer’s day here on Earth, approximately 72 degrees.

“If it has a surface, it ought to have a nice temperature,” said Bill Borucki, Kepler’s lead scientist.

But, the possibility exists that the temperature on Kepler-22b could fluctuate depending on whether the planet possesses an atmosphere, which would warm the surface as our atmosphere does here on Earth. Even without an atmosphere, according to Borucki, the planet could still be warm enough to have liquid water on its surface.

In addition to the temperature on Kepler-22b, another striking similarity exists between Earth and the newly discovered planet. As Batahla stated, the star Kepler-22b orbits around could be a twin of our own sun.

Kepler-22b even orbits at approximately the same distance from its sun as Earth from our sun; it also has an orbital period, 290 days, similar to our own.

NASA’s newly discovered planet, however, does not share every characteristic of Earth that has allowed life to flourish. Kepler-22b is approximately 2.4 times the size of Earth. This large size could mean that the planet is dominated by a large ocean and rocky core.

“It’s so exciting to imagine the possibilities,” said Batalha, who added, “It’s not beyond the realm of possibility that life could exist in such an ocean.”

To this point, the Kepler telescope has discovered 2,326 candidate planets outside our solar system, 139 are considered potentially habitable. Though Kepler-22b may be too big to support life on its surface, it is closest to Earth in size and temperature, not to mention the similarities between its sun and ours, than the two planets previously announced in habitable zones.