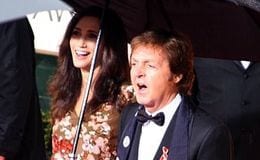 Nancy Shevell and the former Beatle said “I do” at Old Marylebone Town Hall in London on Sunday. The small service was attended by family and close friends, and upon McCartney’s return to his home, he told waiting fans, “I feel wonderful,” says abcnews.com. Among the guests were Ringo Starr and Barbara Walters, who is a second cousin to Shevell.

Shevell is an American heiress to her father Mike Shevell’s transportation conglomerate, estimated to be worth nearly a half billion dollars. She is currently the company’s vice president and is a board member of the Metropolitan Transportation Authority.

This is Paul McCartney’s third marriage. His first wife Linda McCartney died of breast cancer in 1998, and his marriage to second wife Heather Mills famously ended in a bitter 35-million-dollar divorce. Nancy Shevell first met McCartney in the Hamptons 20 years ago while married to Nassau County lawyer Bruce Blakeman, with whom she has a son.

The McCartneys and Blakemans were familiar with each other through the Hamptons’ social scene, but the heiress and Beatle weren’t romantic until the summer of 2007, after they were both separated from their spouses. Within a year they became inseparable, Shevell even embracing McCartney’s vegetarianism herself. And according to her clothing, she seems to have a nice rapport with McCartney’s fashion designer daughter Stella. Shevell often dons her designs and graced the aisle on Sunday in a custom Stella McCartney dress.