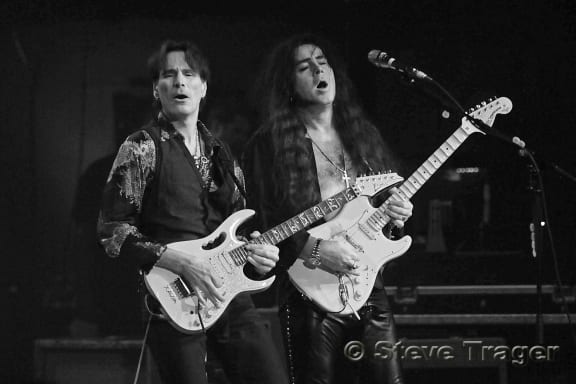 It’s been twenty years since the initial concept known to guitar fanatics around the world as the G 3 Touring cycle that featured Joe Satriani as the headliner alongside some amazing additional guitarists performing in front of countless music fans.

We are truly fascinated and intrigued by numerous guitarists for their unique blend of musical talent that has quickly become a true inspiration to musicians across a spectrum of talent.

While many guitarists still captivate our senses for a great guitar riff or ear shattering decibel solo, that often exceeds a standing ovation for an endless performance, we admire each individual for style and graceful melodies spanning a great power ballad.

Recently unveiled to the touring cycle for the first time in 2016 is Generation Axe, certainly a label that describes an evening of great talent from amazing virtuosos sharing the stage for one incredible evening of rock meltdown instrumental style.

Generation Axe which is the first of its kind to feature a blend of guitarists that have shaped music and defined a generation surrounding talent second to none, certainly can be the new touring circuit for years to come with a roster of talent lending more than just a few guitar licks and effect peddles to intrigue music fans.

Joining this amazing tour, eighties icon Yngwie J. Malmsteen alongside guitar mates Nuno Bettencourt, Steve Vai,  Zakk Wylde, and Tosin Abasi rounding out a diverse blend of musical talent that has wowed fans in every market on this tour leading up to its stop at the ever popular Tower Theater. Opening the show with all five musicians paying homage to Boston’s Four Play definitely was an eye opener, with each guitarist lending endless talent in the mix of it all in center stage not mentioning all the guitar solos one can digest in a quick moment. It’s not who opened for who or who closes the show, generation axe was more along the lines of a revolving door with each musician performing several songs spanning a limelight of musical interlude of ecstasy for the mind that goes beyond a visual spectacle. Music fans were treated to some unique guitar work from Tosin Abasi who hails from Animals As Leaders. With much of his music under the rock radar, it was a great additional to the lineup of artists sharing the stage during this monumental tour package. The show featured some great moments with Zakk Wylde performing his blistering renditions of Sabbaths’  N.I.B, Hendrix’s Little Wing and closing with an Allman Brothers’ tribute with Whipping Post. Three long songs having fans on their feet throughout each song leading up to Zakk roaming down the aisles while maintaining seeming less solos obviously wasn’t the highlight of the show. For any fan who still loves the eighties Sweden’s export to the music world Yngwie Malmsteen defiantly redefines metal with the visual look and feel of the greatest moments in his set spanning several instrumentals from Rising Force and Trilogy CD’s. Malmsteen still is a true innovator of the word classic showman with guitar tricks while maintaining speed and spot on rock riffs. Other stellar highlights from this incredible evening of guitar work, Nuno Bettencourt entertained the crowd with his medley of extreme classics including some brilliant acoustic guitar segments certainly winning over fans in an instant without a doubt. And ofcouse Steve Vai is best known for his work with David Lee Roth as a solo artist and lending guitar licks to Whitesnake in 1988. His twenty-minute set included Edgar Winters Frankenstein amongst some fantastic solo material spanning his last few CDs.

Closing out what fans would defiantly say was the Highlight of the show when all five guitarist joined forces with Yngwie Malmsteen belting out Deep Purples Highway Star.

Putting them all together makes up for a one of a kind world class act hands down with numerous standing ovations at the Tower Theater.

Sure we have our favorites and our bands we can listen on repeat for days and hours at a time, but a show like this really staples a true description of Guitar Greatness.