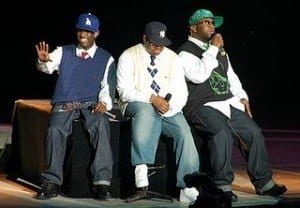 If you’re into RnB’s long – lost sibling called New Jack Swing, it’s time to bust of the jean overalls and high top fades, because Boys II Men have come back with “Twenty”.  The title reflecting the group’s twenty – year career, the album contains two CDs: the first comprising of new material, the second is eight re – recording of their hits, including “Motown Philly”, “End of the Road”, and “It’s so Hard to Say Goodbye”.  Those feeling nostalgic will pick up the album based on the second CD alone.

Roots is one of the few individuals whose voice can be recognized the moment you hear it.  His voice – that warm, bassy, British timbre – coupled with banging beats, make for some awesomely listenable albums.  “4everevolution” is no exception, taking the formula that worked so well in the past and throwing in a hint of dubstep (“Here We Go Again”) and you have something that fans will snatch up with the quickness.

You may not heard the city of Kashmere Gardens, Texas, but from the late ‘60s until 1978, it was home of the one of the funkiest bands ever, and they were only teenagers.  The Kashmere Stage Band was the brainchild of Conrad O. Johnson, a music teacher at the Kashmere High School, who wanted a band that combined funk, soul, and RnB and ,most importantly, have a band kids will not be embarassed to play.  The result was nearly – twenty years and splendid funk, eight studio albums and a group of kids that would never look at high school the same again.  After being lost of decades, the recordings surfaced, and the folks at Now – Again records gathered the best of the bunch into a 2 – CD anthology, along with a DVD detailing the history of the band.

For a change of pace, here’s The Revelations.  This group is a perfect counterpoint to Kashmere Stage Band’s gorgeous funk outhings.  Featuring the soulful sounds of Tre Williams, they makes a nice, relaxing mood with Williams’s vocals and the group laid – back grooves.    Definitely something to chill out to.