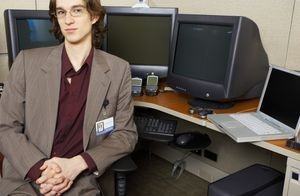 Researchers prove teenagers worst at trying to multi-task between electronics

Confident that you can watch “Jersey Shore” while finishing that 10-page essay? Think again.

The Daily Mail reports that scientists have proved multi-tasking with two screens is impossible. The study involved volunteers who were put in a room with a computer and a TV for half an hour. Their attention shifted between the two nearly once every 14 seconds. Teenage volunteers proved to be the worst, switching an average 120 times in 27.5 minutes, while those over 40 made the switch 100 times.

According to the study, most subject weren’t even aware of their actions! “On average, participants in the study thought they might have looked back and forth between the two devices about 15 times per half hour. In reality, they were looking nearly 10 times as often. And even if quick ‘glances’ less than 1.5 seconds are removed from the equation, people were still switching over 70 times per half hour,” Professor of Marketing Adam Brasel of Boston College, Massachusetts said.

As the site details, the study raises questions about the level of comprehension among those who switch between devices, like students.

Read more about the study here.