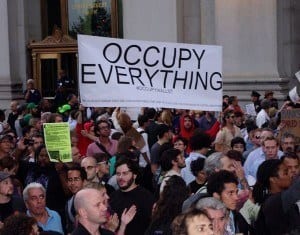 Mingling with protestors, MTV has followed the lives of four protestors in lower Mathattan in the midst of “Occupy Wall Street.”

The episode will follow one of the leaders of the Occupy sanitation group, two college students worried about the job market after graduation and one person who struggles between a job as a paralegal and staying active in the protest world.

Interestingly, MTV, the channel that is airing the show, is a part of a Viacom, a company that trades on Wall Street. We will have to wait and see if this conflict is shown in the episode or if “Occupy Wall Street” is just in it for the publicity.