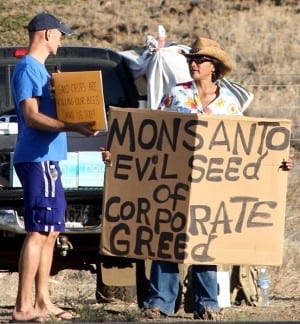 Monsanto has been receiving a lot of negative publicity lately, but nothing seems to faze the company. The leading producer of glyphosate herbicide and genetically engineered seeds, Monsanto seems infallible, successfully avoiding numerous lawsuits.

Last Friday, Judge Naomi Buchwald dismissed the case of Organic Seed Growers and Trade Association (OSGATA) et al. v. Monsanto. The lawsuit asked to invalidate Monsanto’s patents on genetically modified (GMO) seeds and to prohibit the company from suing those whose crops become genetically contaminated because they drift through the air.

Monsanto filed a pre-trial motion to dismiss the case in July. Over 300,000 people are represented by 83 plaintiffs from 36 organizations in the case against Monsanto.

Monsanto has forcefully pursued lawsuits against farmers for “genetic trespassing.”  Many of these farmers claim to not have had the intention to grow or save seeds that contain Monsanto’s patented genes. Seed contamination and pollen drift from genetically engineered crops often migrate to neighboring fields due to wind and other environmental factors. If Monsanto’s seed technology is found on a farmer’s land without a contract the farmer can be found liable for patent infringement. Dozens of farmers have been driven into bankruptcy by these lawsuits and many organic and non-GMO farmers are now hesitant to plant seeds.

Monsanto’s history of aggressive investigations and lawsuits brought against farmers in America has caused anxiety for organic and non-GMO agricultural producers since Monsanto’s first lawsuit brought against a farmer in the mid-‘90s.  Since then Monsanto has filed lawsuits against 144 farmers, alleging violations of their patented seed technology.

Monsanto has sued more than 700 additional farmers who have settled out-of-court rather than face Monsanto’s belligerent, and well-financed, litigious actions.
Monsanto was also facing a lawsuit claiming that from 1948 to 1969, Monsanto manufactured herbicides at its Nitro chemical plant, which created dioxin as a byproduct. According to the suit, dioxin was released into the air when waste material was burned at the old Monsanto plant. Plaintiffs filed the suit in 2004 against Monsanto, Pharmacia Corp., Akzo Nobel Chemicals Inc., Akzo Chemicals Inc., Flexsys America Co., Flexsys America LP, Flexsys International LP and Flexsys International Co.

A potential settlement reached in the massive Monsanto Co. case. The $84 million settlement was granted preliminary approval in a massive class action case seeking medical monitoring after plaintiffs claim they were exposed to dioxin released from a Monsanto chemical plant.

Parties agreed to provide a 30-year medical monitoring program at a local hospital. Preliminary funds of $21 million will pay for medical testing, and if certain conditions are met, $63 million in additional funds will go for 30 years worth of medical screenings.

The settlement also granted $9 million as part of a program to offer free cleaning of affected homes. Authorities estimate there are 4,500 homes in the remediation area.

Monsanto also won another round in a long-standing patent dispute with chief competitor Pioneer Hi-Bred International, as a federal appellate court  upheld Monsanto’s ownership of a patent on transgenic corn on Tuesday.

The U.S. Court of Appeals for the Federal Circuit affirmed a ruling by the U.S. Patent and Trademark Office’s board of patent appeals that found Monsanto’s patent claims were senior to Pioneer’s even though Pioneer filed and was awarded patent protection before Monsanto’s application.

In a separate case, the two companies are fighting over Monsanto’s Roundup Ready herbicide-tolerant trait technology for soybeans and corn.

Previous ArticleMichigan primary resultsNext ArticleLeap Year upon us once again