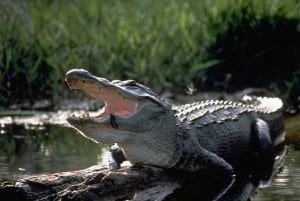 Assumption Parish Sheriff Mike Waguespack says Mitchell Guist was pronounced dead at a hospital today. He was reportedly loading something onto his boat around 9 a.m. when he slipped and fell. He was on the Intracoastal Waterway, near Pierre Part, La.

Onlookers said that Mitchell Guist appeared to be having a seizure. Someone reportedly tried to perform CPR on Guist, but attempts to resuscitate the alligator hunter were unsuccessful. An autopsy will have to be performed before an official cause of death can be announced.

Swamp People features Mitchell and his brother Glenn, residents of Louisiana’s Atchafalaya swamp country, during alligator hunting season. The third season of the show debuted on the History Channel in February. The Swamp People website describes the brothers like this: “Swampers through and through, Glenn and Mitchell Guist were born and raised on the bayou and lived entirely off the land. These brothers were always up to something, whether it was hunting for their dinner or making use of everything nature has to offer.”

On Mitchell’s Facebook page, he described himself as a simple man. “I like to hunt and fish. I like to hang out with friends. Im just a normal dude.”