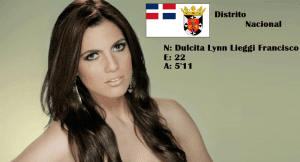 Maybe they should start checking backgrounds earlier in the pageant process

The rules of the pageant state that those competing for the crown must not be married or divorced.

The briefly-crowned Miss Dominican Republic said in a statement Wednesday night that she had never lived with her husband.

“In my daily life, I remained like a single woman,” the statement said, adding that she never thought herself materially or spiritually married.

The statement added that the marriage was brief, and the couple had begun annulment proceedings but did not specify whether the annulment was finalized.