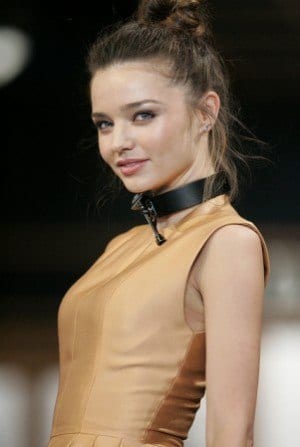 According to the report, which boasts an unnamed source, the popular, and totally gorgeous, model simply wasn’t selling well for Victoria’s Secret and the popular lingerie model had a “difficult reputation.”

“The Victoria’s Secret brand is bigger than any of the individual model’s brands,’ said editor of Ad Age, Abbey Klaasen, according to ABC News.  “That is why Victoria’s Secret can get away with recycling models every few years.”

But Victoria’s Secret officials have fought rumors that attack the model’s reputation or suggest that she will no longer work for Victoria’s Secret.  “Miranda Kerr is one of the best models in the history of the business — and easily one of the most popular,” president and chief marketing officer Ed Razek said in a statement, according to People Magazine. “She is also a consummate professional. Any rumors to the contrary are simply untrue.”

He added that Victoria’s Secret “has no plans to stop working with her,” and that Kerr has plans to walk in the company’s famous fashion show this year.

Kerr was even selected to model the company’s 2.5 million dollar “fantasy bra” in their 2011 fashion show in New York.  The 30-year-old model is also the wife of actor, Orlando Bloom, and mother to their two year old son, Flynn.

Her other professional commitments include founding cosmetics line Kora Organics, being a spokesmodel for Mango and modeling Qantas airlines’ new uniforms designed by Marin Grant.  Last month, according to the Los Angeles Times, she ended her “Fashion Ambassador” relationship with Australian retailer David Jones.

A source reportedly told People magazine that “if Miranda and Victoria’s Secret part ways it’s not because of her behavior. It’s purely contractual. She’ll be coming back for the show but it’s unclear if she’ll be in future campaigns. But she is definitely one of the most popular models and in high demand.”