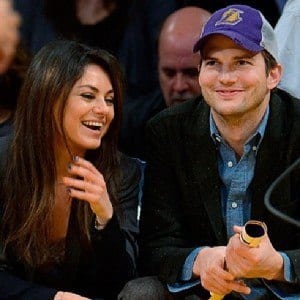 Mila Kunis and Ashton Kutcher are expecting their first child

She may be recognized as the new face of Jim Beam bourbon, but actress Mila Kunis will soon be entering a world of baby bottles, booties and pacifiers within the next nine months.

Despite rumors of twins, a source told E! News Sunday that Kunis, 30, and fiancé Ashton Kutcher, 36, will be expecting their first child together later this year.

“[Having a baby] is something they both wanted,” a contact close to the couple confirmed to Us Weekly. “They are both so happy.”

Kutcher’s divorce from previous wife Demi Moore, 51, was finalized last November. During their eight-year marriage, Moore’s frustration with the inability to conceive a child was widely publicized. However, Moore reportedly felt closure about her relationship upon hearing the pregnancy news.

As for the elated couple, “It was a total shock for both of them, but they feel up for the challenge,” a friend said to OK! Magazine. “It didn’t seem like it was possible for them to fall any deeper in love, but the prospect of raising an insta-family together has solidified their commitment to each other.”

Mila Kunis and Ashton Kutcher’s friendship began when co-starring on the hit series “That ‘70s Show,” which aired from 1998 to 2006. The couple had been dating for approximately two years before announcing an engagement last month.