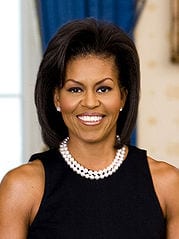 Racing fans ‘booed’ Michelle Obama and Jill Biden while they were grand marshals during NASCAR’s final even on Sunday, reports CBS News.

Obama and Biden were at the Homestead-Miami Speedway to promote the organization Joining Forces, which promotes the hiring and training of veterans.

It’s reported that Sgt. Andrew Barry, a veteran of the Afghan and Iraqi wars who now volunteers at an Orlando, Fla., veteran’s center, was cheered for by the crowd, but that the tone changed when the First Lady and Dr. Biden were announced.

Despite the episode at the final event, the women were received in a warmer manner at the pre-race driver’s meeting, reportedly receiving a standing ovation.

Michelle Obama had also spoken at a barbeque for military families, hosted by  NASCAR and Joining Forces.  She commended the children of military families for their “sacrifice of being strong while their parents are away.”