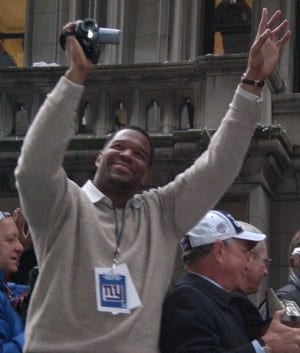 Michael Strahan is filling the co-host position on ‘Live! With Kelly’

It has been revealed that Michael Strahan is indeed Kelly Ripa’s new full-time co-host. The show will be newly titled Live! With Kelly and Michael.

The former New York Giant is replacing Regis Philbin on the ABC program who left last November. The co-host was the original Live! host for more than 28 years. It wasn’t until 2001 when Kelly Ripa joined him.

Michael Strahan had formerly joked about taking Philbin’s position on the show. After appearing on the program following the Giant’s Super Bowl win in 2008, he was asked what he would do after retiring from the NFL. Strahan replied saying that Philbin’s job looked pretty good.

Strahan was up against several other guest co-hosts which included Nick Lachey, Seth Meyers, Anderson Cooper, Neil Patrick Harris and even Ripa’s husband Mark Consuelos. However, it was Michael Strahan that landed the position in the end.

Strahan showed up for his first day with a dozen roses for his co-host Kelly Ripa. Ripa said “It’s so nice to have a co-host literally sweep you off your feet. And I know that he can bench press me if he wanted to.”

The first guest star to appear on the show was Claire Danes.