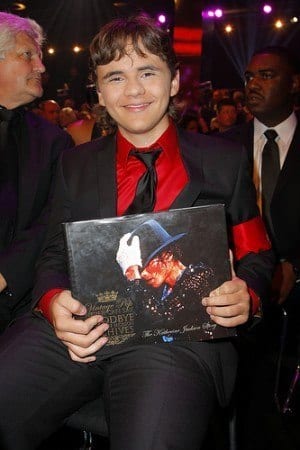 During Michael Jackson’s “This Is It” tour, AEG Live is being accused for negligence in hiring Dr. Conrad Murray, Jackson’s personal physician.  Murray, who was caring for the singer as he prepared for shows, was later convicted of involuntary manslaughter in 2011.

AEG Live executives have taken the stand and denied the accusations. The trial began in April and on Wednesday, Jackson’s oldest son, Prince, will testify on his behalf. The 16-year-old is the first of three to testify, as TJ Jackson, co-guardian of the three kids, and Taj, TJ’s brother, will soon give their testaments.

If you recall, Michael Jackson was said to have died at the age of 50 due to an overdose of the surgical anesthetic propofol while rehearsing in Los Angeles for a series of comeback concerts in London in 2009.

AEG Live has stated they did not hire Dr. Conrad Murray and argues that Jackson had prescription drug and addiction problems well before entering into any agreement with the concert promoter.

Standing along side Prince are three other plaintiffs, including Katherine Jackson, 83, and Jackson’s other children, Paris and Blanket.

If this trial isn’t enough to handle for the month of June, Michael Jackson’s daughter, Paris, was rushed to the hospital after attempting suicide. Los Angeles Superior Court Judge Mitchell Beckloff was forced to order a court investigation into the 15-year-old’s “health, education and welfare” when Paris was hospitalized on June 5 for taking Motrin pills and cutting her arm with a kitchen knife.

Katherine Jackson’s lawyer, Mr. Perry Sanders, said that Judge Beckloff reviewed the report on the investigation and will not be making any changes in Jackson’s children’s living situation.