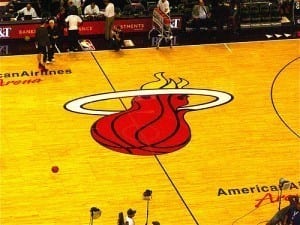 Lebron the king and Dwyane the bear show us their dance skills in new Harlem Skake video.

The Miami Heat has joined in on the Harlem Shake dance craze. The viral video dance has become one of the most popular Youtube trends and is getting lots of attention from the media.

The Harlem Shake looks nothing like it did in the 90s. The once hardcore shoulder shimmy is now full on hip thrusting, arm flailing costume party. Universities, businesses and sports teams are all getting in on the fun.

The Miami Heat put on their best gear for the Harlem Shake. In the video, Lebron James is a twerk king, Dwyane Wade is a fancy disco bear, Chris Bosh is a dirty cowboy with a boom box, Mario Chalmers is Super Mario (doing a cross between gang signs and sign language. I’m not quite sure.), and Chris Andersen is a… mohawk eagle? It wasn’t serious enough for him to go bald.

The popular dance video usually starts with a loner dancing by themselves or a room full of people going about their normal lives for the first twenty seconds or so. Then, the beat (and video) fade out only to return full force with a crowd gone wild in costume, or lack there of, to music producer Baaur’s “Harlem Shake” song.

Many commentators are upset about the name of the dance, particularly the “Harlem”. Another video, “Harlems reaction to the Harlem Shake”, shows Harlem natives being upset and expressing feelings of being mocked by white society.

Lighten up ladies and gentlemen. It’s just dancing. And not everyone has enough rhythm to do the dance with one name but two styles. Perhaps one day, the two will forge into a new dance altogether. But for now, the less structured, less complicated, version is working for (almost) everyone except well, Psy. You know, that Gangnan Style  pistachio guy.