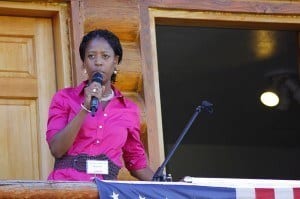 Mia Love isn’t just the mayor of Saratoga Springs, Utah. She is Utah’s first black female mayor, now in the running to be the first black Republican woman in Congress. And, by the way, she’s Mormon. So it’s no wonder she caused a splash during her two-minute speech last night at the Republican National Convention in Tampa.

The daughter of Haitian immigrants, 36-year-old Mia Love spoke about the American Dream as a story of self-reliance. Her parents, she said, came to the United States with $10 in their pockets. “When tough times came, they did not look to Washington,” she said. “They looked within.” She added that President Obama’s politics would pit Americans against each other along gender and socioeconomic lines.

Mia Love continued by sharing her support for presidential nominee Mitt Romney and running mate Paul Ryan, who she believes can revive “our story,” the story of the American Dream.

Though her speech was short, Mia Love got several standing ovations and a “U-S-A” chant to boot. Today, she is getting plenty of press for being a rising star in the GOP and rousing the convention where other delegates could not.