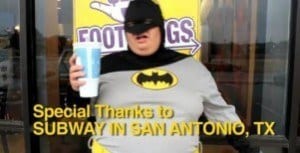 Man dressed like the Dark Knight arrested for obstruction of justice

PETOSKEY, Mich. — A Batman impersonator was arrested by police after he refused to clear a crime scene. Mark Wayne Williams, 33, was arrested by state troopers and taken into custody wearing a Dark Knight costume after corrupting a police search for a missing driver.

The Dark Knight must have put on a few pounds at Wayne Manor, as the plump Williams tried to volunteer his help to the local authorities in their search.

The police search for a driver who fled an accident scene ended up in one arrest: Batman’s.

“He wouldn’t clear the scene, and we had a canine out there and he kept screwing up the scent,” State Police Sergeant Jeff Gorno told the Petoskey News-Review. “He said he wanted to help us look for the driver. We didn’t want the dog to track Batman instead of the accident scene, and he was getting in the way of officers who had a job to do.”

Oddly enough, this was not the first time the chubby Dark Knight had a run-in with the law.

Williams’ was arrested last year after police received a report of a man dressed as Batman on the roof of a local Petoskey business. Batman must have also had to budget Wayne Enterprises’ spending, seeing as Williams did not have any of the Dark Knight’s prized gizmos and gadgets on his person at the time of his arrest. Rather, the faux caped crusader carried with him a baton-like striking weapon, a can of pepper spray and a pair of sand-filled gloves.

Williams did not have any dangerous weapons on him the second time he was arrested. He pleaded guilty to one count of attempted resisting and obstructing a police officer. Williams was also sentenced to six months probation during which he was forbidden to wear costumes, including his Batman suit.