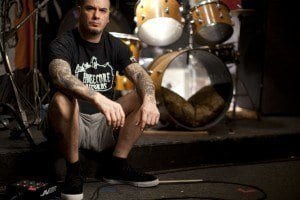 We sit down with Phil Anselmo and Bruce Corbitt to discuss the album, rightly so dubbed, “War of the Gargantuas”

When you take decades of heavy metal experience and couple that with prepping to release two new albums, on top of an overall kick-you-in-the face attitude, you’re left with the most recent split EP, featuring Phil Anselmo and War Beast.

CN: What made you guys decide to do the split EP

PA: This is something that, when I first realized that I was gonna’ do the solo record, and record a bunch of shit that I’d been writing for a while, Bruce had offered up their drummer, Lou Jose Gonzales, to jam with me because I guess it was just part of the family, and he was an excellent drummer. It really made just logical sense.

I guess it is about three years ago on each one, because my stuff now is fucking old to me, damn near two and a half years old. So yeah, its about three years in the making as far as the idea of it, and now that we’ve done it I think it’s a great thing man and its something that I guess it’s a good lead in to each one of our records.

CN: Right on. You guys definitely just did this to, not refresh your fans, but say ‘hey, were coming back out with something, get ready’

PA: Well we were probably gonna’ do it anyway, but in serendipitous fashion, it only made logical sense to do the split we always wanted to do. Because [both of our LP’s] were due, the new full lengths, or definitely War Beast at least, so it just made sense.

CN: Let me ask the both of you this question. You guys are definitely in the same genre, but both bands have a distinct sound from each other. So do you have a hard time splitting the album in terms of cohesion?

BC: Well I think it was a good thing that both bands sound so unique. That’s what I think is the hardest thing for bands to do is create their own sounds. To me, that’s a great thing; we didn’t want our songs sounding alike to where you can’t tell the difference. It’s obviously some new music no one has heard out of Phil; obviously War Beast has got our own sound. Together I think it works though; I’ve heard nothing but good reviews so far.

PA: War Beast to me is the epitome of DFW Thrash sound encapsulated […] I grew up with it, watched it happen, and really its like they captured the full DFW feel and sound of the thrash movement that happened throughout the 80’s and in general. With it being 2013, I think its still very relevant because of modern sounds and production in general, to where they sit like a fucking grove and actually surpass certain other projects that I guess are attempting to do the same thing as far as thrash goes, but nothing will be the pure DFW thrash that War Beast is. As far as my stuff goers, its like….do I want to be labeled just thrash…I’m not sure about that, but I’m gonna’ leave that to the experts out there.

Check out both Phil Anselmo and Warbeast out on tour now.