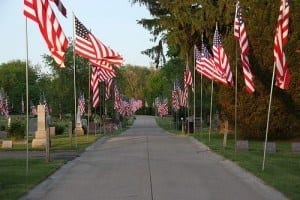 Whatever your plans, be sure to pay tribute to the U.S. soldiers who have sacrificed everything

Memorial Day is fast approaching and that means heavily-crowded highways, long-waits at airports and, most importantly, a chance to reflect upon and remember the tremendous sacrifices past and present members of the U.S. military have made for the freedoms many Americans take for granted.

Memorial Day is celebrated all across our nation in a variety of ways; from wreath-laying ceremonies, parades, concerts and festivals to simply paying homage to family and friends who have sacrificed nearly everything for the sake of the American people and the freedoms we keep close to heart.

Memorial Day is a federal holiday, meaning all non-essential Government offices, schools, businesses and other organizations are closed. Originally known as Decoration Day, Memorial Day began as a way for the United States to honor Union soldiers that had been killed in the Civil War, which ended in 1865. After World War I, the holiday was extended to include all men and women that have died in any way or military involvement. The 1968 Uniform Holidays Bill created a concrete holiday out of Memorial Day. From 1971 to today, the Memorial Day holiday has been observed on the last Monday in May.

For many Americans, Memorial Day offers a chance to pay tribute to family members and friends who have died in service of our country. Many Americans use the three-day weekend to take a short vacation, given many consider the Memorial Day-weekend the unofficial start of the summer season. This often means congested commuting in one way or another.

The price of gasoline has dropped drastically in recent weeks and now averages $3.68 a gallon. This price is nearly 20 cents cheaper than it was at this time last year.

AAA expects 30.7 million people to take road trips this coming weekend, an increase of 400,000 over last year’s number of drivers during the Memorial Day weekend.

With the status of the American economy still up-in-the-air, it is no surprise that those with the most wealth are those most likely to vacation this year. AAA estimates approximately 36 percent of those who earn $100,000 or more annually will take a road trip this holiday weekend, an increase of six percent from last year. Families making less than $100,000 annually are expected to travel less this year.

Whatever your plans for the holiday weekend may be, make sure to remember the sacrifices our nation’s fallen soldiers have made in order for Americans to live, and celebrate, freely.