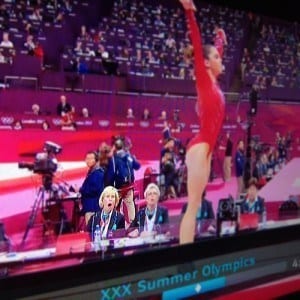 McKayla Maroney is only 16 and will walk away from the 2012 London Olympic Games with both gold and silver medals. But what lasts even longer than gold? Well, not many things, but Internet fame may be one.

McKayla Maroney has become the star of her own Internet meme, complete with her disappointed scowl atop the silver medal podium after her vaulting competition. The “McKayla Is Not Impressed” meme can be found all over the Internet nowadays, but the gymnast isn’t exactly thrilled with her Internet fame either.

McKayla Maroney appeared on Today this morning and spoke about her sour expression atop the podium.

It may not appear so from the picture, but McKayla Maroney has said she is impressed with her silver medal.

Maroney’s vault during the team competition was astounding and helped the U.S. women’s gymnastics team earn the gold. There was even a debate about whether her vault should have earned a perfect score, which it barely missed.

“This tumblr is kinda funny,” Maroney tweeted. “Made me laugh.”