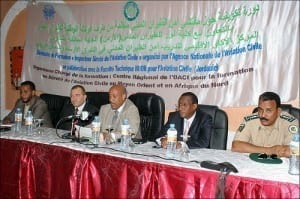 Mauritania, a western country in Africa, was the last place that Abdullah al-Senussi will see as a free man. The former Libyan intelligence chief for assassinated Moammar Gadhafi flew into the country of Mauritania late Friday night. It has been reported that Senussi was carrying a fake Malian passport when he arrived in the Mauritania capitol of Nouakchott from Morocco. Mauritanian authorities detained Senussi, which ended the six-month long manhunt that began after the fall of Gadhafi’s regime.

Mauritania is planning to hand over Senussi, but the question of where he will be tried is starting to become a sensitive issue. Libya wants to try him for ordering the execution of 1,200 prisoners in the Abu Salem prison in 1996. France convicted him in absentia in 1999 for the 1989 bombing of a French airliner over Niger that killed everyone on board, and the International Criminal Court (ICC) has indicted Senussi on multiple counts of crimes against humanity, mainly for, “the deliberate massacre of Libyan civilians during the popular uprising against the Gadhafi regime,” reported The Inquisitr.

The decision, put on the shoulders of the West African country of Mauritania, is very much politically charged.  If Mauritania gives Senussi to Libya, both France and the ICC are afraid the country will not have the proper resources to try the former Gadhafi spy-chief; though, Libya feels differently.

Mauritania hasn’t made any responses to the competing claims of extraditions, but it is known that the former French colony has had spotty relations with Western nations and has had close ties with Gadhafi. Mauritania, “isn’t a signatory to the treaty that created the ICC, a court that is intended to try crimes against humanity or war crimes that national courts can’t or won’t prosecute,” reported The Wall Street Journal.

However, there have been speculations as to whether Senussi was actually detained or not since there has been a lack of photographic evidence.