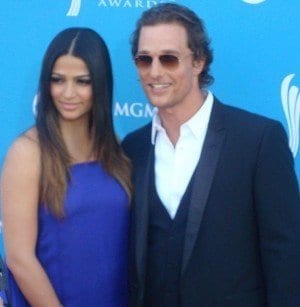 Matthew McConaughey married Camila Alves, girlfriend of six years, with whom the actor has two children. The wedding took place in their Austin, Texas home Saturday.

The wedding had a fun-fair atmosphere as hammocks were scattered about for guests to watch the ceremony from. Ring-tossing and bean bag games were set up as well, and People magazine Senior Writer Charlotte Triggs called it a “fun, silly time” for the guests waiting for the bride to walk down the aisle to her groom.

Also available to the guests, were air-conditioned tents outside of Camila Alves and McConaughey’s home. One source said the tents were unusual to traditional camping and contained showers and restrooms.

Woody Harrelson and filmmaker Richard Linklater were among Camila Alves and McConaughey’s guests.

A Camila Alves and McConaughey guest said, “The ceremony was very emotional. There was a moment when . . . [Matthew] leaned down and whispered something in [Camila’s] ear and you could see a tear coming down her face. Everyone let out a collective sigh.”

McConaughey proposed to Camila Alves on Dec. 25th, 2011. But Camila Alves said, “We’ve been living a married life this whole time,” and added that her children were eager for the wedding, despite their young age.

McConaughey happily gushed, “I found the woman I wanna make a family with, hopefully live our life out together,” according to Us.