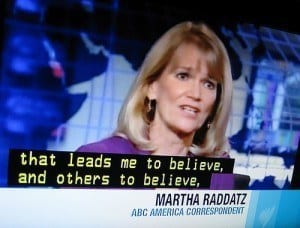 The debate moderated by Martha Raddatz was heated, and both Congressman Paul Ryan and Vice President Joe Biden knew that their role in last night’s debate was to come in full force and ready to battle. Both candidates were ready to represent their respective parties on the issues regarding domestic and foreign policy, and Raddatz was more than prepared to give the questions.

Martha Raddatz has built her career as a reporter through her impressive journalism concerning both domestic and international news, including her covering of the mission that killed Osama Bin Laden. Raddatz is a seasoned journalist whose career is full of impressive accomplishments, in addition to being the author of the book The Long Road Home: A Story of War and Family.

Appearing on ABC’s Good Morning America, Martha Raddatz spoke to the morning show about her strategy going into the debates. She came in with the plan to ask the hard question, to be aggressive, but was surprised after by her ability to have such a hands-on approach.

“You try to listen, and you try to react to what they’re saying. Sure, I had a lot of follow-ups written; I had a lot of questions written, but when you’re there and you’re in the moment, you really have to go with what’s happening,” said Raddatz about her active role during the vice presidential debates.

Her aggressive questioning thrilled some who watched her performance during the debate, and that is perhaps in contrast with Jim Lehrer’s performance as presidential debate moderator. Many said Lehrer did not perform well because of his inability to control the candidates, who often went over time and cut the moderator off mid-sentence to finish their thought.

In an interview with Politico, Lehrer said his approach of letting the candidates take hold of the debate went the way he wanted. “Based on what the goal was, I saw it as successful. I’ve always said this and finally I had a chance to demonstrate it: The moderator should be seen little and heard even less. It is up to the candidates to ask the follow-up questions and challenge one another,” said Lehrer.

This is the difference between the two moderators. Jim Lehrer believes he should be present in the actual debating as little as possible, and Martha Raddatz saw her performance as a chance to go in and ask the difficult questions in the most active of ways. Raddatz’s moderating last night seemed to not just be asking the questions as moderator, but rather as a voice for the people who have the same questions.