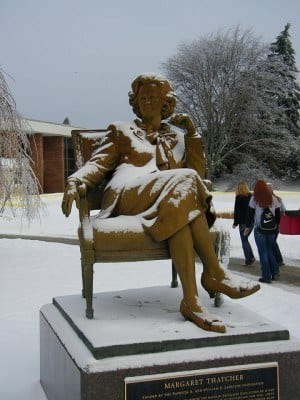 Margaret Thatcher was the first female prime minister of Britain and the west.  She won three general elections, and her 11 years in Downing Street made her the UK’s longest-serving leader in modern times, according to ABC News.  She died Monday at the Ritz in London.  She had been in poor health for months and was suffering from dimentia.

But Margaret Thatcher’s many accomplishments as prime minister of Britain don’t end there, and the controversy surrounding her hardheaded approach to British politics.

By the time of her retirement as prime minister in 1990, Thatcherism-the belief that economic freedom and individual liberty are interdependent, that personal responsibility and hard work are the only ways to national responsibility and that free-market democracies must stand firm against aggression, had earned her much international praise, especially from the United States.

David Cameron, the current British Prime Minister, cut short a trip to Madrid and called off a diplomatic visit to Paris.  He described her as the “patriot Prime Minister,” saying: “She didn’t just lead our country, she saved our country.”

But her hard-nosed approach to international cooperation made her a popular target for members of her own parliament who disliked her opposition to further economic integration with other European countries.

Thatcher is also widely known for dividing the country, especially during a year-long miners’ strike, when unemployment peaked at three million.

Thatcher died at the Ritz hotel in London, where she had been living since December after leaving the hospital.  Both Houses of Parliament will be recalled from their Easter break tomorrow for special tribute, according to ABC News.  Thatcher will receive a ceremonial funeral with military honors at St. Paul’s Cathedral, one step down from a full state funeral.

World leaders are expected to attend the funeral of the woman who became known as the “Iron Lady,” for her fight against the Soviet Union and victory for an unlikely war in the Falkland Islands in 1982.

President Barack Obama said: “The world has lost one of the great champions of freedom and liberty, and America has lost a true friend… Many of us will never forget her standing shoulder to shoulder with President Reagan, reminding the world that we are not simply carried along by the currents of history — we can shape them with moral conviction, unyielding courage and iron will.”