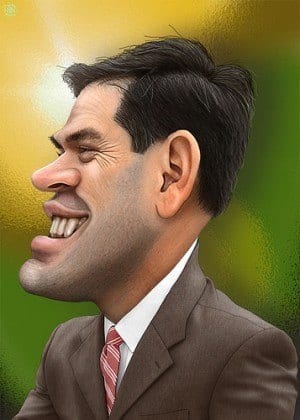 Marco Rubio, a Republican senator from Florida, framed and delivered the Republican response to Obama’s State of the Union speech on Tuesday, which aired on MSNBC—one of the few networks that covered the annual speech still subject to the Fairness Doctrine.  The bilingual senator displayed a polished and warm demeanor on the airwaves, and upset the balance of the Twitter universe for basically inexplicable reasons for a hot minute last night.

As predicted, this year’s SOTU heavily covered the economy, with the latter half of the 90-ish minute speech speaking on health care, gun control and citing a bevy of “common man” heroes smattered throughout the crowd.  Post-speech, Marco Rubio spent a lot of his airtime responding to Obama’s plans for a minimum-wage law and healthcare reform.  Marco Rubio is a middle-class Miami native of Latino heritage, a fact that conveniently came into play when he remarked that we need to return to small-government policies which enable immigrants and minorities to climb the economic ladder to the middle class.

In regards to the minimum wage law, Marco Rubio said, “I want people to make a lot more than $9 — $9 is not enough. The problem is you can’t do that by mandating it in the minimum wage laws. Minimum wage laws have never worked in terms of having the middle class attain more prosperity.”  What works? Making the private sector grow, of course.  Marco Rubio continued to espouse “big government is bad” and classic Republican bromides last night, offering a pleasant new face to the seemingly age-old debate.

Perhaps because neither Obama’s speech nor Marco Rubio’s rebuttal was exceptionally riveting, or perhaps because in politics a simple subtle jab will set everyone a-titter, Marco Rubio achieved twitter-verse fame on Tuesday with his now-famous bottle reach.  Mid-speech, Marco Rubio reaches for a water bottle off camera, and sips it, delicately and unsuccessfully ducking from camera view. By now Marco Rubio and “water-bottle gate” is the star of many a meme, gif and gaffe, even his own.  Post taping, the not unlikable senator posted a pic of the infamous water bottle and tweeted #republicanresponse.  Oh do stop! We’re in stitches.