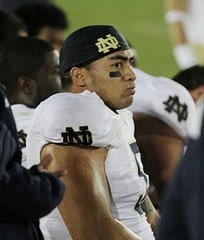 Manti Te’o, star linebacker at Nore Dame, played all season with the emotional burden of a girlfriend, Lennay Kekua, a Stanford student who had been fighting a losing battle with leukemia. While Te’o was on the field, Kekua was bed-ridden and in a comatose state. It became the most inspirational and heatbreaking sports story of 2012.

There was only one problem: none of it was true. And now Manti Te’o finds himself in the middle of a hoax gone wrong.

The girlfriend, the cancer, and the car crash that put her in the hospital, according to reports from Deadspin, were all imaginary. Lennay Marie Kekua, whose death made headlines all over the nation, wasn’t a person at all. There were no records of her birth, death, or funeral; no obituaries to be found. No mention of her death was made in Stanford’s student newspaper, and, according to the admissions office, no student by that name was ever enrolled at the school.

According to a story in the South Bend Tribune, Manti Te’o and Lennay Kekua first crossed paths at a Stanford vs. Notre Dame game in 2009. They exchanged phone numbers, and Manti Te’o’s father stated that she would later make a visit to Teo’s residence in Hawaii.

“Every once in a while, she would travel to Hawaii, and that happened to be the time Manti was home, so he would meet with her there,” said Brian, Manti Te’o’s father.

By 2012, Te’o and Kekua were a couple and ESPN was reporting that they talked on the phone every night. Around this time, it was reported by Manti Te’o that the woman had gotten into a serious car accident and was on the “brink of death”. While recieving treatment for her injuries, doctors discovered she had leukemia. Te’o tells Sports Illustrated that he spends every night on the phone with Kekua. In September 2012, Kekua supposedly died from her disease.

Kekua’s Twitter account, on which she frequently communicated with Manti Te’o, was stocked with pictures of a woman currently living in California, according to Deadspin. She had never met Manti Te’o, and wasn’t aware her pictures were being used. The account’s tweets to Te’o have been deleted.

Manti Te’o addressed the controversy Wednesday, and claimed he was the vitctim of a “sick joke”.

This is incredibly embarrassing to talk about, but over an extended period of time, I developed an emotional relationship with a woman I met online. We maintained what I thought to be an authentic relationship by communicating frequently online and on the phone, and I grew to care deeply about her,” said Te’o. “To realize that I was the victim of what was apparently someone’s sick joke and constant lies was, and is, painful and humiliating…In retrospect, I obviously should have been much more cautious. If anything good comes of this, I hope it is that others will be far more guarded when they engage with people online than I was.”

The story is reminiscent of the film “Catfish”, which details how someone can maintain a fake persona and engage in relationships online.

It is unknown whether Manti Te’o was in on the hoax, or was simply a victim.