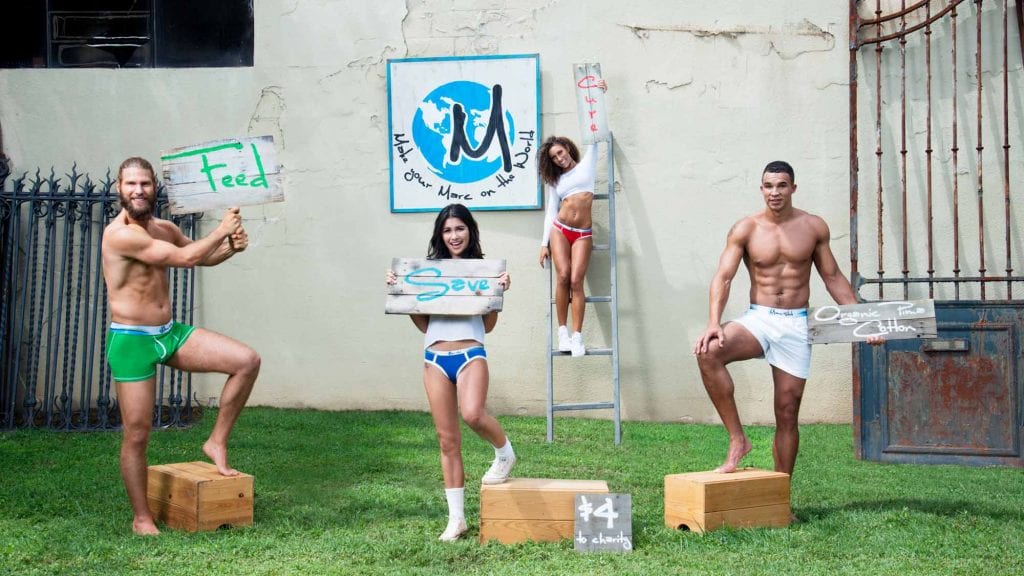 With Marc Skid eco-friendly underwear, you can better the world one pair of undies at a time. It’s all about everyday people helping everyday people, because anyone can make a difference—just by wearing undies.

OK, OK—but who is this Marc Skid guy?

Marc Skid is not a real person but an idea thought up by two buddies tossing around ideas while kicking back beers. The creator of Marc Skid organic underwear, Dan Barry, noticed a pair of high-end men’s underwear on his buddy’s coffee table. “We just got talking about underwear,” Barry recalls.

The pair noticed and chuckled that the packaging of the undergarment was so serious—a man with a six-pack and a “Zoolander-Blue Steel” look on his face. Barry remembers thinking, “That’s all you have to bring to the table to sell underwear?” It was that thought that inspired the eventual ethos of the brand. All brands, not just underwear, should have the same qualities as the people we’re drawn to in life: The ability to laugh at oneself, a strong character and a purposeful existence.

The humor of Marc Skid organic underwear can be found in its cheeky name. Barry laughs that another connection made that night was a common childhood experience between the two friends. “Both of our mothers were insanely concerned about the status of our underwear prior to a pediatrician visit,” Barry recalls. So Barry channeled their mothers’ fears into a fictional fashionista that sells underwear. On a more serious note, Barry draws inspiration for Marc Skid organic underwear from his mission work. “During my mission work, what I remember most is the laughter, it was everywhere,” says Barry. As Mark Twain said, “The human race has only one really effective weapon, and this is laughter.” If just one time the wearer, going through their morning routine, looks in the mirror and is reminded of the gift of laughter, then the true meaning or purpose of Marc Skid’s little play-on words has been achieved.

The character of the brand can be found in how Marc Skid organic underwear is made. Barry traveled to Peru to source the world’s finest cotton, organic Pima. Only approximately .0005 percent of the entire world’s cotton in a given year is organic Pima. Marc Skid also paired up with REPREVE® to use recycled polyester made from recycled water bottles—incorporating one bottle in each waistband. This isn’t magic: Water bottles are made of polyester so we upcycle them into waistbands. Although expensive, this is the right thing to do because of the world plastic issue. 85 percent of plastic waste, which can take 1,000 years to decompose, goes to landfills.

“Make your Marc on the World” is not only the brand’s call to action, but also its purpose. Barry says, “We believe there are people out there who share our passion for changing the world—one pair of undies at a time.” Marc Skid’s commitment to every customer is to facilitate their desire to help cure those who are ill, Feed those who are hungry and save our beautiful world. In addition, Marc Skid wanted to give each person a choice. After deciding whether to help cure, feed or save, you then direct which of the nine four-star charities you want to receive your $4 donation ($4 is donated per pair). “We have a deal for three pairs, which equates to a $12 donation because we hate to see you leave a cause out,” Barry says with a laugh.

“The one thing that wasn’t mentioned is that conversation with my buddy happened over 25 years ago,” Barry states. “I had a 25-year corporate career that came to an end in 2015. It was then, inspired by the many giving people I’ve had in my life and somewhat challenged to do more by their example, I knew what I needed to do next.

“So, hold on to your ideas and dreams and when the time is right, go for it. We’re a six-month-old company and I’m driven by the opportunity to Make our Marc on the World together. If one pair of undies and that $4 donation can feed a child for twelve days, plant four trees or vaccinate two children, imagine if we sold a million or even ten million pairs.”

Barry laughs, “I was never good at math, so you can figure it out.”