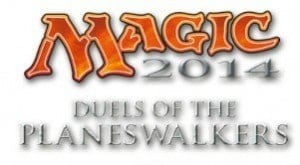 Still one card short of a full-deck.

The history of Magic the Gathering is deep and, as fans of the card game know, is celebrating it’s 20th anniversary this year. To keep up with the times, MTG has gone digital, releasing new versions annually and this year is no different. With Magic 2014: Duels of the Planeswalkers, Wizards of the Coast is releasing the game on every platform imaginable and is implementing new game modes to push your fetish for MTG to embarrassing levels of depravity. A new, story-based campaign is implemented, and the beloved unlockable decks and cards return to act as a figurative carrot to keep you progressing forward. As previously announced, a Sealed Deck mode is new to the series and allows players to open their own packs and build their own decks. The general problem with Magic 2014 is that, while it makes nods to game modes and features that players want, it doesn’t entirely answer the call.

For the single player campaign, Chandra Nalaar is on full display using her fire magic to seek  revenge on the villainous Zorislav. To get the opportunity to face him in battle, you must journey through planes like Innistrad and others, defeating four particular challenges in order to face the ruler of the particular plane. Win, and you unlock another deck for use. Lose, and you’re stuck trying again. Winning any match will unlock one of thirty unlockable cards available for each particular deck, but you’ll only earn cards for the deck you’re using at the time of the victory. The biggest challenge is perhaps the first battle after the tutorial, versus Chandra Nalaar herself. Because you’ve got only one deck, designed for a specific type of combat, and you’re pitted against another deck that’s designed specifically to torment you, it can get frustrating very quickly.

The newest addition is the Sealed Deck mode, which sees players opening their own packs of Magic the Gathering 2014 cards and creating a deck, arguably one of the most joyful moments from the original tabletop card game. As you progress through the sealed deck mode, you’ll unlock up to three additional packs to open to enhance your deck. Once through that you can take your sealed deck online, however whatever the Gods of Luck granted you within your packs is what you’re stuck with. After opening the initial packs plus the additional you gain from the Sealed Deck Campaign, there’s nothing else to do except purchase another deck slot, unlock those initial pack and then progress through the campaign again. While it’s a great step forward, beyond the online play the use of Sealed Decks is limited. Players can’t use their own decks for the single player campaign, free-for-all matches or two-headed dragon. It’s frustrating, particularly for dedicated players who, beyond slight modifications to particular cards and rules, see little variation in overall gameplay.

Admittedly, Wizards of the Coast has to do something to ensure that their tabletop card game doesn’t suffer from reduced sales due to the implementation of digital options, however most Magic the Gathering players who have grown with the card game are dedicated to it on all fronts. The campaign is robust and helps explain some of the lore in the world of MTG, opening the door for novels that are available. After the campaign there are still plenty of options with both single player and online multiplayer. With the game appearing on Xbox Live Arcade, Playstation Network, iOS, PC/Steam and for the first time on Android devices, having a cross-platform option would help justify purchasing sealed decks for online play. As it stands, those looking for the deep experience inherent in the Magic series will certainly find it here, but it’s not quite on par with the game we know and love.